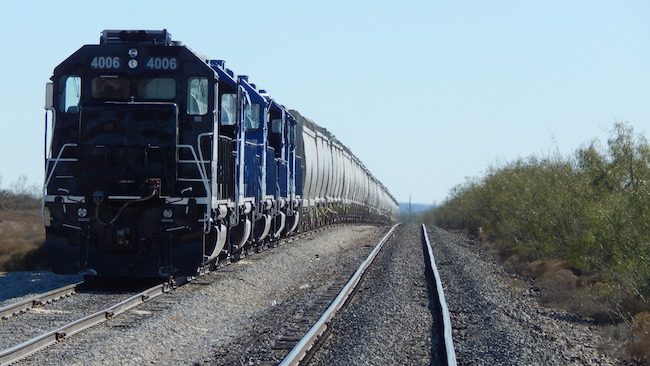 Texas Pacifico Transportation takes on the monumental task of rebuilding the Presidio-Ojinaga International Bridge in hopes of diversifying and expanding.

Transporting sand by rail to oil wells for use in hydraulic fracturing is more than 80 percent of Texas Pacifico Transportation’s business. To protect itself against market downturns in the future, the company is focused on diversifying the commodities it moves and upgrading infrastructure to do so.

Texas Pacifico entered into a lease agreement 15 years ago with the state of Texas and the Texas DOT to operate the South Orient Rail line for 40 years with five renewal options of 10 years each. Facilities must be maintained at least in the condition they were received, including the Presidio-Ojinaga International Bridge. “For close to 90 years, we will be responsible for operating and maintaining the facilities we were given by them,” Executive Vice President Federico Diaz-Page says. “We need to rebuild the bridge and it’s important because it’s an international bridge; one gateway that connects to and from Mexico.” 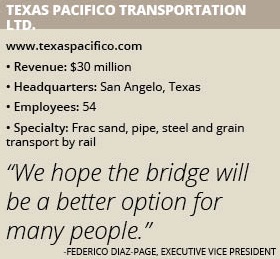 The Presidio-Ojinaga International Bridge crosses the Rio Grande between Presidio, Texas, and Ojinaga, Chihuahua, on the border of the United States and Mexico, and has been out of service for almost a decade. The first lane caught fire in 2008 and the second lane caught fire almost exactly one year later in 2009. “We are certain no one is waiting for the bridge because it hasn’t been there for a long time,” Diaz-Page says. “We are doing marketing efforts on both sides of the border to see which industries would jump onto the rail service north and southbound.”

Federal, state and local authorities in the United States and Mexico are involved in the reconstruction of the Presidio-Ojinaga International Bridge. “The conceptual design has been finalized and delivered to the International Boundary and Water Commission, the United States Coast Guard, the U.S. Army Corps of Engineers, etc., and their counterparts in Mexico for the permitting process. Each government sector involved will either provide an approval or generate a requirement, which when integrated into the conceptual project will conform the executive project meaning ready for construction,” Diaz-Page explains.

In early 2017, Texas Pacifico is expecting to bid the work and begin construction within the first half of the year. “We believe it will take 10 months to one year to build,” Diaz-Page notes. “It is out there in the middle of nowhere supplies wise with the closest mayor cities being a couple hundred miles away. We hope to have the bridge ready in 2018.”

Texas Pacifico sees the Presidio-Ojinaga International Bridge as the shortest connection between two regions – Chihuahua and Dallas/Fort Worth. “It’s the quickest and shortest way to move,” Diaz-Page says. “There are some ports in the Pacific Coast of Mexico that would work well for traffic. That’s an educated guess based on asking customers if they want to move commodities with us. We have received a positive reaction. We hope the bridge will be a better option for many people.”

Texas Pacifico is owned by Mexico City, Mexico-based Grupo Mexico, the largest mining corporation in the country and the third largest copper producer in the world. “Once we have the bridge built, I think this will be the only one that has the same company on both sides offering real seamless interchanges,” Diaz-Page says.

The bridge runs through less inhabited towns and Diaz-Page says it should boost the local economies and create jobs. Texas Pacifico currently employs 54 people and outsources a majority of its services, including maintenance of way, IT, legal and dispatch. “I think with the commodity diversification the bridge should bring things that will be different,” he adds. “Our operations will almost double when we begin to move more than 50,000 cars annually.”

Moving forward, Texas Pacifico sees the Presidio-Ojinaga International Bridge as its starting point. “In three years, so many other things need to be taken care of,” Diaz-Page says. “The bridge won’t solve everything. We have to rehab the track, continue our marketing effort, develop new customers and services, and understand which routes we will connect – Chihuahua to Dallas is one. There is a lot of work that has to be done, so many rules to comply with, so many entities to visit and talk to and conditions to be met. It’s fun, but I hope not to build another in my life.”