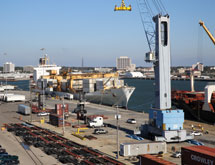 The Port of Gulfport is in a unique position: It’s in the midst of a $570 million port restoration project.

“The restoration provides an opportunity to modernize the facility for the next generation of traffic flow, rail movement and crane operation,” says Jonathan Daniels, port director.

“This will allow us the opportunity to meet the needs and demands of our existing tenant base and bring in new customers,” Daniels adds.

Hurricane Katrina wrecked the Port of Gulfport in 2005 and left only the skeletons of buildings. Containers and materials washed up on land, and casino barges and vessels were lifted up onto the land by the storm.

“There was very little, if anything, left,” according to Daniels. “In the midst of what remained after the catastrophe – this [restoration] has allowed us the opportunity to plan and begin reconstruction on the port completely devastated by the hurricane.”

The restoration project will add an 84-acre infill, making more space available in the port’s west terminal, Daniels says. Crowley Liner Services Inc. is a specialized container carrier serving primarily the Western Caribbean and Central American market. The construction project includes the creation of a large transit shed and chiller facility for Chiquita and Dole bananas, pineapple, plantains and mangos, which are imported through the port. Chiquita and Dole also export craft linerboard boxes used in Central America for production. The Port of Gulfport is the No. 2 importer of green fruit into America and the No. 3 busiest container port on the U.S. Gulf of Mexico.

DuPont in July 2013 inked a deal with the Mississippi State Port Authority to lease the port space for 30 years. Under the agreement, DuPont will relocate its current ore receiving and storage operation to the southern end of the west pier, increasing capacity and operating flexibility. The port is located near DuPont’s DeLisle facility.

“The DuPont DeLisle plant has been in operation for more than 33 years and remaining competitive in the global marketplace is critical to the sustainability of the company’s operation,” says Gary Burge, DuPont DeLisle plant manager. “This agreement provides facilities and lease terms that enables the most cost-effective way to import our critical raw material and deliver it to our DeLisle site.”

DuPont imports ilmenite ore through the Port of Gulfport. Ilmenite is a raw material used in the manufacture of titanium dioxide, an inert, non-toxic white pigment widely used in paints, inks, paper, textile fibers and plastics to impart whiteness, brightness and opacity. Once off-loaded at the port, the ilmenite is railed 13 miles to the manufacturing facility.

“The DuPont expansion and long term lease at the Port of Gulfport shows the company’s confidence in the long-term potential of the port,” Mississippi Development Authority Executive Director Brent Christensen says. “As we continue to invest in the port, we expect to see more companies take DuPont’s lead and expand or locate their operations at the facility, creating more job opportunities for Mississippi workers,” he adds.

Once it is completed, the new $80 million bulk handling facility will accommodate storage of approximately 100,000 tons of ilmenite ore.

The newest Port of Gulfport tenant is Gulf Coast Shipyard Group. Based in Gulfport, the company is a leading designer and builder of offshore commercial vessels, offshore and inland barges, oil spill response and patrol vessels.