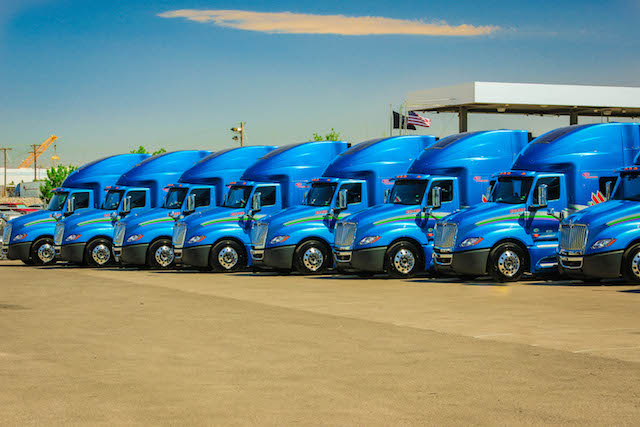 Royal Jones and Jimmy Ray turned their dream into a reality in 1982 when they founded Mesilla Valley Transportation. They started with a fleet made up of five trucks and hauled refrigerated and perishable goods. With hard work and determination Mesilla Valley Transportation has continued to grow year after year. Today the fleet is made up of 1,500+ trucks and 6,000 trailers and is known to be the most fuel-efficient company in the industry.

Mesilla Valley Transportation has their corporate office in Las Cruces, N.M., as well as terminals in El Paso, Texas; Denver; Laredo, Texas; Nashville, Tenn.; and Portland, Ore. Between all their locations they support 400 office staff and 1,500 drivers. “That takes a whole lot of thought. We have groups assigned to thinking through processes for drivers, dispatching, and sales. We have an efficient fleet. We are doing the stuff that makes sense,” Ray says. With an operation this large it is important to Mesilla Valley Transportation to never lose sight of their foundation all while maintaining an innovative approach to remain a leader in the industry. 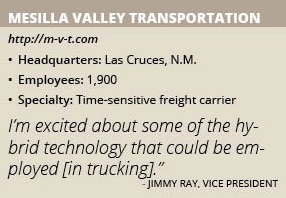 Ray has the experience to know what makes sense. He started driving trucks from Texas to California in 1967 at the age of 17 and bought his first truck two years later. In the early 1970s he met Royal Jones who started driving trucks after graduating high school. By 1982 they founded a small company called Mesilla Valley Transportation. “We were so small, it was just a load at a time,” Ray says. “Now we can execute many things at a time and talk to bigger customers at a larger scale.” Although Mesilla Valley Transportation has grown into the largest locally owned trucking company in the nation, they have kept the same values as when they ran five trucks. Safety is their number one priority, and with the advances in technology they have invested in equipping their trucks with multiple devices to keep the drivers and people on the road as safe as possible. Ray looks forward to still-emerging technologies. “We’re excited about a deal where vehicles ‘talk’ to each other electronically. If vehicles talk to each other and say ‘we’re slowing,’ maybe there will be less 50-car pile-ups.”

Finding and retaining truck drivers is a challenge. Demand has increased due to the dominance of big box stores and e-commerce companies like Amazon. Meanwhile, the number of drivers has decreased. The shortage was at 36,500 in 2016 and projected to increase, according to the American Trucking Association. “Most [trucking companies] have more than 100 percent turnover a year,” Ray says. “The old-time guys have retired. Now we must train a whole new group. Back in the day, in the mid-1980s and 1990s, we didn’t have any recruiting groups.” That’s changed. Like other firms, Mesilla Valley Transportation now works with recruiting companies and has a fully staffed internal recruiting department.

“We try our best to give the drivers what they need. We try to give them job satisfaction,” Ray says. Mesilla Valley Transportation has multiple reward programs in place from a yearly $25,000 bonus awarded to the driver with the best overall MPG and perfect CSA score, quarterly new-car giveaways, and a monthly bonus program available to all drivers. “We have been offering these perks for years, but as the times change and drivers are becoming harder to find we are implementing new programs to make the career more appealing.”

The transportation industry isn’t going anywhere, however as the demand increases and new technologies are introduced to the market the industry will need to adapt to stay successful. “There was a lack of capacity at the beginning of 2018. The trucks were costing a lot more because of all the emissions requirements.” Ray explains that regulations instituted in the early 2000s required exhaust gas recirculation and had a negative impact on truck engines. “The industry has been suffering from engine problems,” Ray stated. “This lasted until a couple of years ago. It took the truck manufactures a good 12 years to learn to make exhaust gas recirculation engines.”

An ongoing challenge is the electronic logbooks or e-logs that replaced paper logs. E-logs are designed to accurately record what a truck does 24/7. Ray doesn’t argue with tracking a trucks movement, but he sees a need to implement more flexibility in the technology. “Now things have to be so well planned out for the driver to perform on the interstate. You can’t have a break and wait for traffic to clear. If you are 50 miles off, you can’t go home. There needs to be flexibility and a fudge factor. You don’t need to work more hours, you just need to have more flexibility,” Ray explains.

The two largest ongoing costs are drivers and fuel. On the latter front, Mesilla Valley Transportation is testing diesel-electric hybrid trucks. Ray likes electric trucks, but the cost is still too high. “For a big truck, the battery would cost $70,000, and the range is about 250 miles. For coast-to-cost drivers, electric is not ready. But a hybrid could be applied.”