To support efforts towards building a more sustainable future, the maritime industry has placed a particular focus on the fuel efficiency of watercraft. Improvements in power train efficiency is one example, while drag reduction is another, which can be achieved using hydrofoils.

Hydrofoils are wing-like lifting surfaces mounted to the underside of boats, used to reduce water resistance by lifting the hull out of the water at high speeds. This increases the vessel’s operating speed and greatly reduces drag, meaning that the same power output can propel a hydrofoiling vessel faster than a traditional boat.

One drawback of hydrofoils is that, at lower speeds when the hull is in the water, the hydrofoil itself can cause additional drag, thereby reducing speed and efficiency. The increased water resistance it creates can also affect the vessel’s maneuverability. The challenge of hydrofoil design is to create a system with all the benefits of hydrofoiling at high speeds, without the associated limitations when operating at low speed. 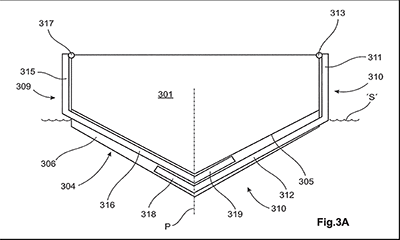 Volvo Penta, a supplier of power solutions to marine and industrial applications, has filed a patent application for a hydrofoil system to overcome this very challenge. Published earlier this year, the pending patent application (US2022250716) discloses a marine vessel with hydrofoils that can be retracted at low speeds in order to reduce water resistance.

As can be seen in Figure 3A, Volvo Penta has proposed a vessel with a stepped portion (306) in the hull (301). The step is designed to accommodate the hydrofoils (309 and 310) which sit flush with this portion of the hull when retracted. With this arrangement, drag caused by the foils can be eliminated when they are not in use, effectively converting the vessel into a conventional boat with a submerged hull.

When deployed, the hydrofoils are rotated outward about hinges (313, 317) as shown in Figure 3B. As one of the hydrofoils nests within the other, the outer foil (310) is deployed first, followed by the inner foil (309). When the hydrofoils are in use (Figure 3C), the hull is lifted out of the water and is maintained in position above the water’s surface by the lift force from the hydrofoils. No longer in contact with the water, the hull generates no additional water resistance.

Despite retractable hydrofoils existing previously, past designs merely retracted the foils closer to the bottom of the hull. This patent application has novel aspects which Volvo Penta considers as providing advantages over other designs. One of the inventive concepts is the stepped hull which allows the hydrofoils to be stowed out of the way of the water flow along the hull of the vessel. Additionally, one of the hydrofoils may nest within the other when stowed, which helps to save space.

The patent application is currently pending but has not yet resulted in any granted patents. However, the European Patent Office (EPO) has issued an “International Search Report” (ISR) on the equivalent International Patent Application, and further examination will follow soon.

In an ISR, the EPO will state whether it believes any previous publications have already publicly disclosed the invention. In this case, the EPO has stated that it does not consider that any relevant prior art exists, so the patent application can proceed to the next stage. This is a promising initial outcome and usually indicates that the patent could ultimately be granted.

In the future, this invention could lead to the construction of marine vessels with improved fuel economy, or vessels that can travel more efficiently and effectively regardless of speed. This could potentially reduce running costs and may serve as a unique selling point for operators. In countries where Volvo Penta secures patent protection, it will be able to prevent competitors from importing, manufacturing, selling or offering its technology for sale. There may also be a commercial opportunity to license the technology to competitors.

Russell Edson
www.withersrogers.com
Russell Edson is a partner and patent attorney at European intellectual property firm, Withers & Rogers. He specializes in advising innovators of technologies for use in a variety of transport industry settings – road, rail, air and marine. Established in 1884, Withers & Rogers LLP is a leading European intellectual property (IP) firm providing expert advice on the protection and enforcement of IP rights particularly for inventions, designs and trademarks