Skip to content
You are here:Home » Patent of the month
Logistics Technology Features

The UK government has recently announced that it will permit limited use of self-driving vehicles on UK motorways, potentially as soon as this year. Initially, the permission will extend to Automated Lane Keeping Systems (ALKS), which essentially combine lane-keeping assistance (LKA) with adaptive cruise control (ACC).

Expanding the use of autonomous vehicles (AVs) could provide important efficiency and fuel saving benefits, and it is encouraging that the technology has improved to the point where 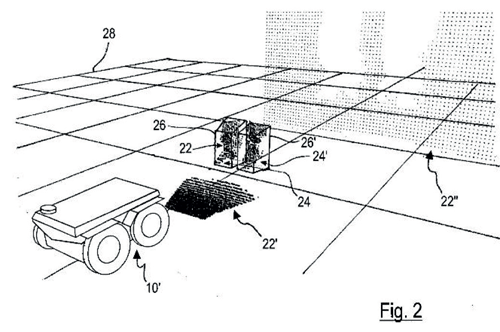 governments feel comfortable approving the use of AVs on public roads. Although the technology has a long way to go, this is a vital stepping stone towards more AVs on our roads in the future.

Something that will be monitored closely as the technology is more widely adopted is the safety of the AVs themselves. As well as being a tragic event, any accidents that occur as a result of the technology could considerably damage the reputation of not only the parties involved, but AVs in general. Therefore, there are ongoing opportunities to develop technology which improves safety without harming performance.

AVs routinely include sensors for scanning their environment to detect objects to avoid collisions. However, existing solutions tend to be limited in their response. For example, they might be programmed to perform an emergency stop if an object comes within a certain distance, even if the object is only passing by and there is no real threat of collision.

SICK AG, a sensing company which historically works in factory, logistics, and process automation, has been working on this problem and was recently granted European Patent 3,663,881 for a ‘Method for Controlling an Autonomous Vehicle on the Basis of Estimated Movement Vectors’.

The patent explains that the movement of an object within the view of the optical sensor can be stored as a motion vector. Taking these motion vectors into account enables the vehicle to be controlled more intelligently to avoid collisions. For example, rather than simply coming to a stop when an object is detected nearby, the vehicle can use the motion vector of the object to determine an appropriate evasive maneuver or speed adjustment instead.

Having secured patent protection for the technology, competitors are unable to use it for up to 20 years, giving SICK AG a competitive edge in the marketplace. Although SICK AG has traditionally focused on the factory, logistics, and process automation spaces, it has strategically sought patent protection beyond these sectors. Doing so provides the business with the option to exploit its innovations in new sectors such as the emerging AV sector, where its sensor technology could be an equally important contributor to safety.

Typically, patent owners choose to either sell or license their patented innovations. However, SICK AG is in the interesting position of being able to do both, with the option to sell its own patented control system to end users, as well as license the technology for use in industry sectors that the business does not usually operate in.

As AVs gradually become more commonplace on UK roads, technology that improves their safety will be in high demand. By patenting its innovation early on, SICK AG has placed itself in a strong position for when the marketplace inevitably grows.

Chris Froud is a senior associate and patent attorney, and Theo Worsley is an associate, in the Electronics, Computing & Physics group at European intellectual property firm Withers & Rogers. They both specialize in advising innovators in electronics and computing, including robotics and autonomous systems.
www.withersrogers.com