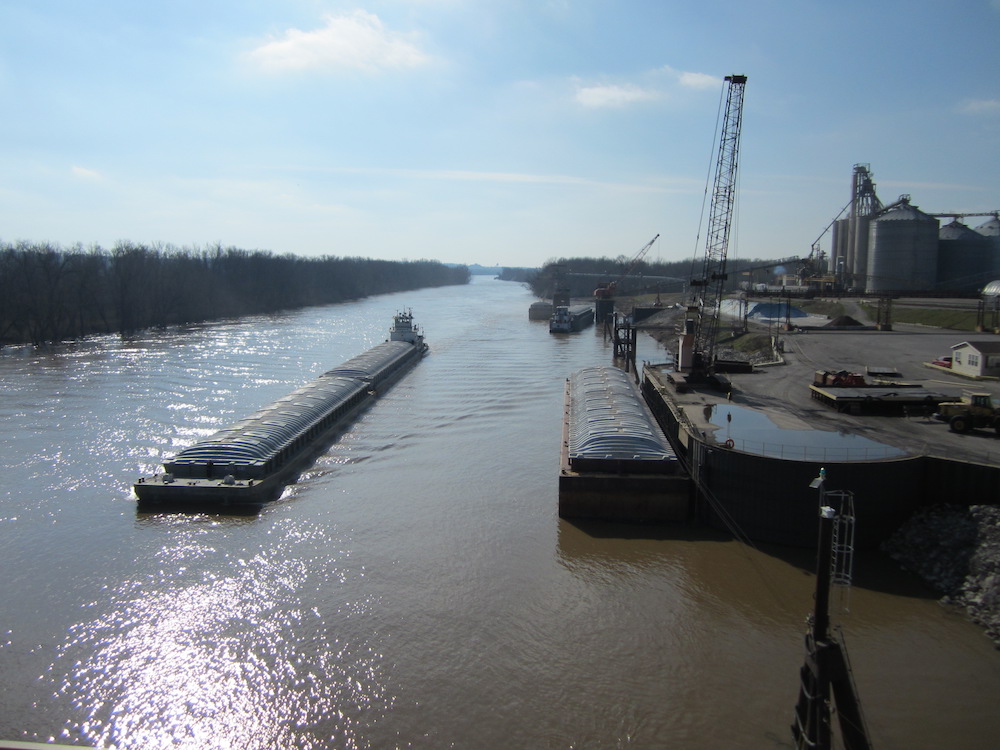 The Port of Indiana – Jeffersonville is expanding its capabilities in multimodal transport with the help of government grants to maintain its aggressive growth.

Located in Indiana at the crossroads of America, the Port of Indiana – Jeffersonville has many advantages. First is its location on the Ohio River near Louisville, Ky., and within a 250-mile radius of most of the automotive manufacturers in the Midwest and southern central states. Boasting multimodal barge, rail and truck connections, the port is strengthening its natural advantages through several innovative projects.

In 2015, the Port of Indiana – Jeffersonville handled approximately 1,300 barges, 17,000 rail cars and 180,000 trucks. The port is home to a number of companies in industries such as steel processing, grain and transportation. “Our companies are in a position to take advantage of the most economical transportation via water and great connectivity through multiple class I railroads and a link to interstate highways that you would expect from a port location in a state known as ‘The Crossroads of America,’” Port Director Scott Stewart says.

In 2015, the Port of Indiana – Jeffersonville set an annual shipping record of 2.8 million tons of total cargo tonnage, which exceeded the previous year’s volume by nearly 16 percent. Shipments of steel in 2015 from 12 metal processing companies at the port serving the automotive, appliance and construction industries more than doubled the previous record set in 2014. This was helped in part by rising demand from the U.S. auto industry, which sold a record 17.5 million light trucks and cars in 2015, according to Autodata Corp.

Grain volume was the second highest in the Port of Indiana – Jeffersonville’s history, following only the record harvest year of 2014. Port companies ship cargo to or from all 50 states and 12 countries.

Big improvements are on their way to the port, thanks to $10 million in discretionary grant money from the U.S. Department of Transportation’s Transportation Investment Generating Economic Recovery (TIGER) program to expand the port’s infrastructure.

The grant will provide partial funding for $17 million in infrastructure enhancements that will add nearly four miles to the port’s existing 11-mile rail network. The project will enhance and overhaul the railroad infrastructure and intermodal capabilities throughout the entire port. Its scope includes construction of a siding to accommodate multiple unit trains with a minimum of 90 cars entering and exiting the port. “Our port needs to be able to handle longer unit trains in order to maintain our competitive edge,” Stewart emphasizes.

The grant also will help reconfigure the waterfront railroad infrastructure. This will include two new rail loops that will increase operational efficiency and construction of a waterfront intermodal facility that will more than double the capacity of bulk commodities transferred from rail cars to barges. Additionally, construction of an intermodal rail yard will offer greater efficiency in transferring cargo between trucks and rail cars, supporting the planned railroad extension of more than a mile that will connect the port with the River Ridge Commerce Center.

Existing rail at the port parallels the 3,200 lineal feet of the waterfront. “The infrastructure improvements, partially funded by that TIGER grant, gives you a large loop, a smaller loop and new inbound track that will be a great advantage to our port companies,” Stewart says. “Those improvements also will provide a bulkloading facility and an intermodal facility that will allow for ease of transfer between truck and rail. This will allow us to double our cargo-handling capacity at the port and to greatly enhance rail service.”

Last October, another improvement project that will aid the Port of Indiana – Jeffersonville, broke ground – phase one of a multi-phase transportation corridor project that will link the port with the River Ridge Commerce Center.

The River Ridge Commerce Center is a business, industrial and distribution park located on 6,000 acres that originally was the Indiana Army Ammunition Plant. More than 40 companies in a diverse array of industries have facilities there. “We believe the River Ridge Commerce Center has great potential for industrial development,” Stewart declares. “When you combine River Ridge with a great inland waterway port facility, you have a multiplier of economic potential for the Louisville and southern Indiana region.”

The transportation corridor project includes a $30.4 million heavy-haul road that will connect the River Ridge Commerce Center and the Port of Indiana – Jeffersonville via the State Road 265 interchange, the first Indiana exit off the new bridge. This project also features a rail corridor linking the Port of Indiana to River Ridge, representing a virtual expansion of the port and its multimodal assets.

Major investment in infrastructure doesn’t stop there. The Port of Indiana – Jeffersonville and the River Ridge Commerce Center will benefit significantly from the Ohio River Bridges Project, which includes two new bridges. “The downtown bridge doubles the capacity of the current Interstate 65 bridge linking the Jeffersonville and Louisville city centers,” Stewart says. “The East End Bridge will be approximately four minutes from the port, giving port companies direct access to multiple interstates and Louisville-based businesses such as Ford Motor Company’s Kentucky Truck Plant and Louisville Assembly Plant and General Electric’s Appliance Park,” Stewart adds. Both new bridges and the refurbished John F. Kennedy/I-65 Bridge will be open by the end of 2016.

“The direct connectivity to the inland waterways system is a huge competitive advantage to companies seeking to leverage the port’s cost-effective transportation resources,” Stewart declares.

Stewart attributes the success of the Port of Indiana – Jeffersonville to the steel, grain and transportation industries. “About half of our 28 companies that operate here are involved with steel processing and handling,” he estimates. “Over the last two years, we’ve had our steel processing companies collectively invest over $50 million in new capacity or more efficient processes.”

The processing of steel at the port includes cutting, slitting and pickling it, and then producing components that go into body panels, engines, frames, wheels, transmissions and suspensions for automakers. The Port of Indiana – Jeffersonville is a key link in the auto industry’s supply chain for an important reason: its location. In fact, following its recent 125,000-square-foot expansion, Mill Steel’s vice president of operations Rob Vella noted that the company stationed itself at the Jeffersonville port for that reason. “It’s located five miles from the center of a circle encompassing a 250-mile radius of the top six auto manufacturing plants in the Midwest and South Central state region,” Vella says.

The Port of Indiana – Jeffersonville, with its steel campus, auto connections and grain and multimodal transportation strengths, is well-positioned to do its part in handling the billions in additional cargo tons the nation’s freight transport system will be required to accommodate between now and the year 2050. The port – which opened in 1985 – has 300 acres available for development.

“While our port team focuses on creating the conditions for success, it is the entrepreneurial, innovative spirit of our port companies that really drive the results that we celebrate,” Stewart emphasizes. “When you think of the 31-year history of this port, its collection of strong companies, a reliable workforce, continued investment and innovation, and now, an unprecedented infrastructure bonanza, there is no question that this port’s best days lay ahead.”