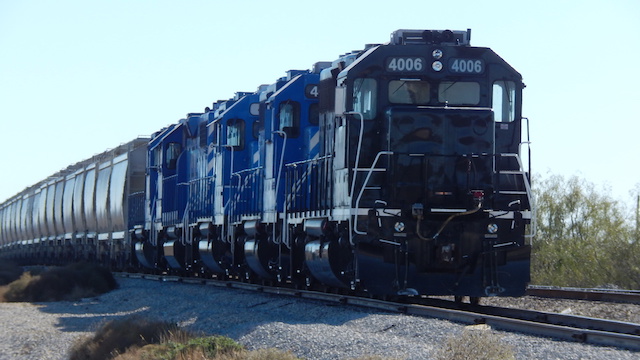 TXPF’s bridge project will help it expand its rail into new markets.

Since its start 17 years ago, Texas Pacífico (TXPF) Transportation Ltd. has operated with a team that keeps it on the path of success. “We’ve got a good group of people that are pulling together,” he says, adding that they do “what it takes to do the job right.”

Based in San Angelo, Texas, the railroad operating company is part of Grupo Mexico and operates over the South Orient Rail Line, which runs from the Mexican border town of Presido, Texas, to San Angelo Junction. The rail line, Meador notes, was built approximately 100 years ago but was on the brink of being scrapped in the late 1980s. 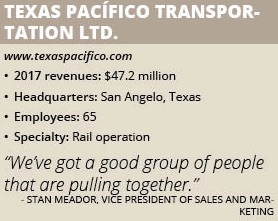 However, many locals were concerned about losing the rail, since it connected lesser populated parts of the state to larger ones.

“Even though it wasn’t being used at the time, they thought it wouldn’t be a good idea for it to be scrapped,” Meador says, noting that the state legislature approved money in 1999 to purchase the railroad.

“We’re 17 years into that arrangement,” Meador says, noting that TXPF has seen significant growth in car loads in recent years. “It will be somewhere around 45,000-car range by the end of this year.”

The oil and gas sector plays a major part in that increase. “The line runs along the southern portion of the Permian Basin,” he says, noting that it also runs close to the Delaware Basin, which has just started to be exploited over the last four years. “We have good access to both of those plays.”

A major project for TXPF is the reconstruction of the Presido Ojinaga International Rail Bridge in Presido. Located on the border of the United States and Mexico, the bridge was damaged in a fire in February 2008, rendering it inoperable.

Today, TXPF is close to awarding the contract for the project. “Next year, we should have a bridge that will reconnect the rail line to Mexico,” Meador reports. “That brings a whole host of opportunities.”

This includes expanding the rail beyond the oil and gas sector, which has used it to transport sand to sites for fracking. But as more companies use local sources for sand, “That is in a total state of flux right now,” he admits.

That does not mean oil and gas will not continue to be an important sector for TXPF. “The Permian Basin is not going anywhere anytime soon,” he asserts.

“It’s got a lot of staying power for years to come, even with ups and downs,” Meador says. “Our plan is to have some diversification from that, [giving us] more than what we have today.”

Meador recently joined TXPF and praises the company for the relationships it has formed with its employees and business partners. “[Helping] these businesses grow, thrive and provide jobs for the community is important,” he says.

He sees a strong future for TXPF with the bridge project and the opportunities it will bring the company. Five years from now, “I’m very confident that it’ll be a different picture from today,” he says. “That’s the brightest piece we’ve got ahead of us.”