Back to Features > A Helping Hand 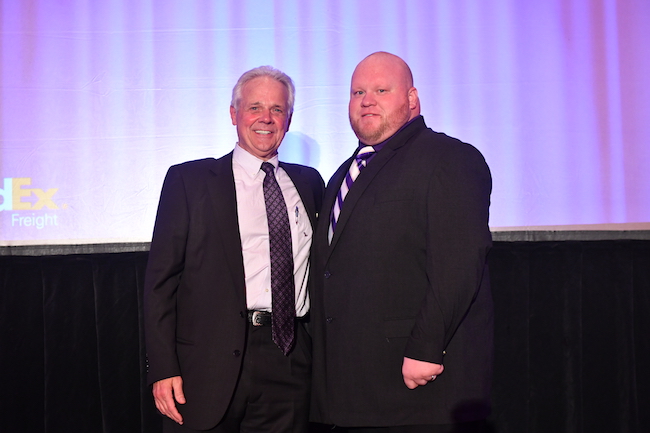 FedEx Freight driver Bryce Neilson was recognized for his extraordinary actions at the scene of a major accident.

People tend to focus on what truck drivers can do to stay safe behind the wheel, but what they do outside of their vehicles often goes overlooked. One person being recognized for his actions outside of the cab is Bryce Neilson, a road driver for FedEx Freight.

On a beautiful day in Montana in November 2016, Neilson found himself assisting at the scene of an accident. It began after he had pulled over to do a HAZMAT vehicle inspection. “A tanker truck, carrying liquid oxygen, came past me, [and] almost hit my truck,” he recalls. When Neilson got back on the road, he ended up behind the very same vehicle.

But the situation became even more dangerous. The driver of the tanker truck fell asleep and drifted off the road. “[He] rolled his tractor trailer off the side of the road,” Neilson recalls.

“I used the FedEx vehicle I was driving to block the driving lane,” Neilson continues, noting that this protected the oncoming drivers from debris and gave the EMTs more room to work in when they arrived.

But because the accident occurred on a blind hill, Neilson took further steps. “You couldn’t even see my semi coming over the hill,” he says, noting that he set up triangles. “[I wanted to] make sure nobody got hurt or even worse. It was a pretty scary day.”

The Jaws of Life

Even after help arrived, Neilson continued providing assistance. “The firefighters had [the] Jaws of Life, but had recently got it,” he recalls, noting that the firefighter using it was not sure where to make a cut.

Neilson, who has previous experience as a volunteer firefighter, was able to lend a hand. “I asked him if I could assist him in using the Jaws of Life,” he recalls, noting that a spreader also was used to pry the driver out.

The driver lived, suffering a broken shoulder blade and clavicle, as well as three broken ribs and a punctured, collapsed lung. “[We] got him out on a backboard,” Neilson says. “He was pretty fortunate.”

Neilson, who has been driving trucks for nearly 13 years, joined FedEx three-and-a-half years ago. The company recently recognized him at its Humanitarian Awards for the assistance he provided after the accident.

“It’s absolutely amazing and humbling,” he says. “I’ve worked for nine trucking companies total, and none of the other companies [recognized drivers for] helping out or being a cornerstone in a situation. FedEx is a great company. I don’t consider it work anymore; I consider it family.”

Neilson, who also was named the 2017 National Truck Driving Champion Rookie of the Year winner, believes it is important for truck drivers to stop and help people, particularly in life-threatening situations. It is also important to communicate with the professionals and EMTs “as far as if they want you to stay or want you to leave,” he says.

It also is important for all drivers to stay safe, Neilson asserts. “It’s your family driving next to us,” he says. “It’s absolutely key we all practice it. I want to come home and hug my family at night.”