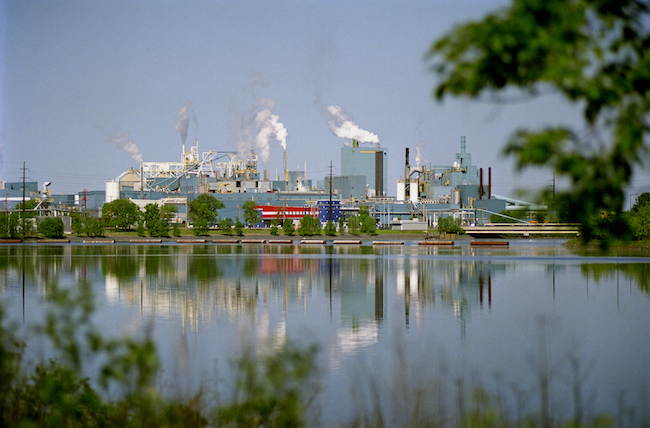 The short lead times required by today’s market and competition from overseas mean that paper maker Boise Paper must create efficiency wherever possible. That is why the company is so heavily reliant on one of the nation’s most cost-effective and consistent means of transporting products: box cars and trains.

Boise Paper’s distribution strategy is centered on access to railroads. Most distribution centers (DCs) are located on a rail spur, reducing the cost and time of delivery. “Only about 10 percent of distribution centers are rail served anymore,” Director of Supply Chain Howard Lortz says. “There’s a lot less railroad access than there used to be. We try to position warehouses so we get the best rate to the DCs and as close to the customer for outbound delivery by truck.” 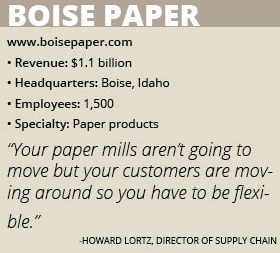 The reliance on rail presents its own problems. It limits where Boise Paper can locate its distribution centers, for instance. “The challenge is rail rates change and if you’re captive in a particular building – if you own the assets and it’s not open to reciprocal switching – you’re really kind of caught,” Lortz continues. “That’s one reason we’ve switched to third-party warehouses with short-term agreements. So if things change we can relocate.”

The company used to operate more of its own distribution centers, but working with third-party partners gave it the flexibility to move operations as rail rates and service changed. In 2016, Boise Paper closed its last remaining distribution center, a 30-year-old, 200,000-square-foot facility located in Bensenville, Ill., and switched operations to Nexus, a third-party warehouse in Bedford Park, Ill.

Most third-party distribution agreements range from month-to-month contracts to up to three years. The short length of the terms enables Boise Paper to react quickly to changes in the railroad. “It’s been the answer for keeping costs down by finding the best facility for service, location and cost,” Lortz says.

“If you’re not willing to relocate your distribution centers and have the systems to support that, you’re at a disadvantage,” he adds. “Your paper mills aren’t going to move but your customers are moving around so you have to be flexible.”

The origin of Boise Paper began in 1958 when the Boise-Payette Lumber Company founded a division, Boise Cascade, to manufacture kraft paper out of a mill in Washington. In the ensuing decades, Boise Cascade built new paper mills or purchased existing ones to expand its footprint.

Boise Paper became its own company in 2008 when Boise Cascade LLC sold its paper division to private equity firm which resulted in the formation of Boise Inc. In 2013, the company was again sold, this time to Packaging Corporation of America, an Illinois-based manufacturer of containerboard and corrugated packaging.

With 35 years at the company, Lortz has been a part of nearly all those transitions and has helped guide the Boise Paper supply chain through the changing paper market. The industry-wide decline has forced paper manufacturers to rethink product lineups. Boise Paper’s white paper division, for example, has less variety than in the past, but the smaller lineup enables the company to better focus on its products and be more flexible.

Boise Paper provides a range of paper supplies, from office paper to opaque and offset papers and envelopes. One division of Boise Paper’s business is copy paper for office use and its customers include some of the largest office supply retailers in the country. The company also manufactures graphic release and label papers.

Most of Boise Paper’s customers are located in the United States but it also ships to Canada, South America and Mexico. The company prides itself on being an American manufacturer, even printing the fact on its labels. “We believe in that strongly,” Lortz says.

The biggest change the industry has seen in recent years is the shortening of lead times, according to Lortz. It used to be that paper mills would manufacture orders a few times a month then ship directly to customers. Customers were more willing to wait for delivery and maintained their own inventory levels to cover the time between when the order was placed and the paper arrived.

That system no longer works in a world where clients are unwilling to incur inventory cost and require just-in-time delivery. Boise Paper now must maintain its own stockpiles to fulfill customer demand. “We’ve gone from almost having no inventory to having large amounts of inventory,” he says. “But at the same time, we’re able to keep costs down in the supply chain because we ship to our 25 third-party [distribution centers] by rail boxcar and we’re able to keep inventory there for our customers.”

A small amount of inventory is still kept at Boise Paper’s three paper mills in Jackson, Ala., International Falls, Minn., and Wallula, Wash., but most of the company’s stock is held at third-party warehouses. The company utilizes a sales, inventory and operations planning (SIOP) process to project demand and determine what products each mill will produce.

The acquisition of Boise Paper by PCA has had a major impact on the subsidiary’s operations by improving the reliability and quality of our paper machines. PCA has been very supportive in helping Boise Paper maintain its service levels to its key customers. “Our supply chain has always been one of our strong competencies and the demand around fine and coated paper require a very robust supply chain,” Lortz explains. He says there are also discussions about co-locating Packaging and Boise Paper distribution in some regions to share systems.

Meanwhile, Boise Paper is working on its own upgrades. When rail cars became difficult to secure for transport a few years ago the company began to expand its dedicated fleet of assigned box cars. It also continues to upgrade and add to the Boise Truck fleet in the busiest markets.

Technology also helps Boise Paper meet demand for quick delivery. The company uses C.H. Robinson’s TMC software, a managed TMS, to provide customers with the most visibility into the entire supply chain. “As the carriers become more connected with dispatch and real-time tracking there’s just more and more emphasis on ‘where is my product and when will it arrive.’ So the TMS helps with that,” Lortz says.

When a customer enters their order number in the ERP system, Boise Paper’s customer service can use available-to-promise (ATP) inquiries to generate information on where the product was manufactured and where it is in the transit process. “We can quote the customer with 95 percent assuredness that you will get the product on this day,” Lortz says.

The average turnaround time from order to delivery is 48 hours if the product is in stock – a fast pace for a company that moves 1.1 million tons of paper annually. Overall, Boise Paper has accomplished a 96.5 percent on-time delivery rate while reducing supply chain costs 2 to 3 percent each of the past five years.

“The requirements for on-time delivery are continuing to become more and more stringent,” Lortz says. “You really need an effective transportation system that has drivers that can be counted on and systems that can be communicated with.”