Back to Features > Delivering the goods

LiBiao’s ‘Mini Yellow’ autonomous mobile robot technology is bringing flexibility and scalability to some of the busiest parcel sorting hubs in China. Will Europe adopt this innovative, low CapEx approach to sortation?

In 2019 China’s express parcels market was valued at $100 billion. Driven by the growth of e-commerce across the country, this figure was up by more than eight per cent on the previous 12 months and the sector is expected to sustain double-digit increases for the foreseeable future.

To put these numbers into some kind of perspective, a staggering 74 billion packages will be delivered across China this year – that equates to 52 deliveries for every man, woman and child living in this vast territory.

To keep pace with this rapidly expanding sector, a number of China’s most significant internet retailers and logistics operators have embarked upon extensive modernization programs at their most strategically significant hubs that have seen traditional sortation methods replaced by ‘Mini Yellow’ autonomous mobile robot (AMR) technology designed and supplied by LiBiao.

LiBiao’s ‘Mini Yellow’ range was developed as a cost-efficient and flexible alternative to the high CapEx fixed tilt-tray and cross-belt conveyor-based sortation systems that have traditionally been used within many busy parcel and e-commerce operations.

The ‘Mini Yellow’ system is a fraction of the cost of a typical cross-belt or tilt tray conveyor and because ‘Mini Yellow’ robots are more compact than other AMRs currently on the market, they require less space within which to operate – a sortation system can be set up in one-fifth of the floor area needed by a conveyor to achieve the same parcel throughput statistics. The time needed to complete an installation is also notably shorter than what is necessary when building conveyor-based sorting solutions.

Furthermore, with no fixed infrastructure requirements, the modular ‘Mini Yellow’ system is scalable and offers complete flexibility: additional robots can be introduced as and when they are needed and the technology is fully portable – meaning systems can be switched between sites if required.

JD.com – one of two massive internet retailers that dominate China’s online shopping market by both transaction volume and revenue – rolled out LiBiao’s ‘Mini Yellow’ system at its MaChong sorting center in 2016. In an area of just 1084 square meters, a fleet of 200 robots can sort some 9000 parcels every hour at the MaChong hub.

STO Express is another Chinese logistics businesses benefiting from ‘Mini Yellow’ robots. Based in Shanghai, STO is one of China’s leading courier companies and provides domestic and international express delivery solutions to a diverse group of customers. At STO’s facility in Tianjin there are approaching 500 ‘Mini Yellows’ in operation. The ‘bots deliver a sorting capacity of 22,000 parcels per hour and occupy a floor area measuring slightly over 2350 square meters.

And one of the world’s biggest postal companies is also using LiBiao’s AMR technology to boost its operational efficiency. Ranked 101st in Fortune Magazine’s Global 500 list of the largest international corporations in 2019, China Post Group Corporation (China Post) handles over one billion parcels each year. The organization has installed the ‘Mini Yellow’ system at five of its busiest sortation hubs, including its site at Hangzhou.

The city of Hangzhou is located around two hours’ driving time south west of Shanghai and China Post’s operation there serves an area covering over 10,000 square miles within which lives a population in excess of ten million potential online 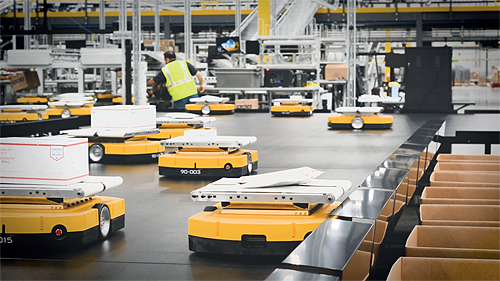 Like most postal sorting facilities in China the Hangzhou site had always been highly labor intensive. However, in an attempt to increase operational performance, China Post recently introduced cross-belt conveyor sortation technology that – initially at least – delivered the improvements the corporation had sought.

But, such has been the explosion in e-commerce that the number of parcels passing through the facility on a daily basis soon exceeded the capacity that could be reliably and accurately sorted by the conveyor system. China Post needed a cost effective, agile and flexible sortation solution that could supplement – or replace – the existing conveyor technology with minimal disruption to the business during the installation process and, after a thorough review of operational procedures and a lengthy tender process, it was decided that the current and future needs of the Hangzhou site could be met by the introduction of ‘Mini Yellow’ autonomous mobile robot technology.

Some 700 ‘Mini Yellow’ AMRs operate continuously at China Post’s Hangzhou site and handle up to 30,000 parcels per hour in an area measuring just 3200 square meters.

Incoming vehicles are unloaded and packages are delivered to a series of induction stations, which are located at the perimeter of the raised grid system on which the robots operate.

At each induction station a worker places a parcel – which can be up to one cubic meter in size and weigh as much as 5kg – onto a waiting robot at which point the package’s shipping label is automatically scanned and a destination chute is assigned based on the city to which the parcel is bound.

The LiBiao ‘Mini Yellow’ robot’s navigation system directs each ‘bot and its load to the assigned chute and, on arrival, the parcel is tipped via an opening in the grid into the allocated chute. The parcel slides in to a waiting mail sack on the level below.

The control system indicates when a sack vis full and detailed delivery information is printed and attached to the mailbag before it is transferred to the dispatch area and into the waiting delivery vehicles.

Since the installation of ‘Mini Yellow’ robot technology at its Hangzhou site China Post has been able to reduce its labor costs significantly: where once 50 workers were required to carry out 15,000 sorts per hour, now just ten are needed.

In addition, because the LiBiao robots use considerably less power than fixed cross-belt conveyors, energy costs at the site have dropped by 40 per cent. Each ‘bot automatically takes itself to the nearest battery charging point when topping-up is required and a five-minute charge is all that’s needed to achieve four-hours of operation. The ‘Mini Yellow’s’ green credentials are further enhanced by the fact that the maintenance-free battery lasts for five years.

One hundred per cent sorting accuracy is now being achieved and thanks to the fact that each robot can be replaced if required, the sorting solution does not suffer from the same downtime issues associated with conveyor systems – where a single point of failure can bring the entire sortation process to a halt.

LiBiao supplied the technology to China Post under a ‘Robots As A Service’ finance scheme, which means that the system is, effectively hired and monthly payment charges are based on the number of parcels processed.

LiBiao Robot founder and chief executive, Xia Huiling, comments: “LiBiao’s ‘Mini Yellow’ robots bring a high-tech, very cost-effective solution to the sortation market. As Chinese companies such as JD.com, STO Express and China Post and other organizations globally have found, the system has unrivalled flexibility compared with traditional sorting methods and truly deserves to be recognized as a ‘game changer.’”

So far more than 10,000 LiBiao autonomous mobile robots are in operation at ‘blue-chip’ client facilities worldwide – including Walmart in the US, Uniqlo in Japan and Kmart in Australia – and it is estimated that some two billion parcels a year are processed using LiBiao AMRs.

LiBiao Robot recently announced that two models from the ‘Mini Yellow’ range are now available in Europe – a 5kg tilt-tray robot and a 30kg cross-belt model. Both types have CE certification.

Xia Huiling, comments: “We believe that the European logistics market will benefit from our advanced mobile robot technology. The hardware, software and management system for the ‘Mini Yellow’ sorting system has been refined to the point where our clients usually recover the cost of their investment within one and a half to two years.”

Established in 2016, Libiao Robot is a modern high-tech enterprise specializing in the development of robotic systems for the post, parcel and logistics sectors. The company’s autonomous mobile robot technology is in operation across China, Australia, New Zealand, South-East Asia and the USA. Based in Hangzhou, the capital of China’s Zhejiang province, Libiao Robot has an annual turnover in excess of $10 million.
www.libiaorobot.com