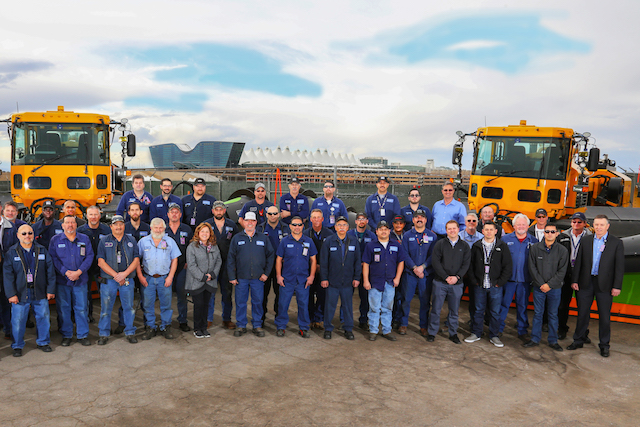 Denver International Airport takes a team-minded approach to maintaining its extensive fleet of snow removal and other equipment.

Denver International Airport (DEN)’s fleet management staff takes an active role in the department’s operations. “Our people on the floor are the one who are bringing up a lot of ideas about how we can improve. They will test those ideas, and then we fine-tune and implement them,” Director of Fleet Management Jeffrey Booton says. “Our operations are a total team effort; we have a pretty open and engaged culture.”

The airport’s fleet management staff has greatly improved the way it maintains vehicles and equipment since Booton arrived there six years ago. Booton previously served in the U.S. Air Force for 27 years, where he worked in a similar capacity. 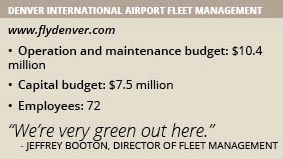 “When I got here, there wasn’t really an administrative staff – people came in, dropped off a pink slip noting what was wrong with a vehicle, and then left,” he says. “In the past six years, we’ve built a fully functioning fleet management team.”

During Booton’s tenure with the department, it has eliminated 200 under-utilized assets from the fleet as a result of its annual utilization analysis program.

The airport’s fleet includes more than 1,700 vehicles and pieces of equipment, including snow removal vehicles, airport rescue and firefighting equipment, forklifts, cranes and light duty vehicles. “We have everything you can imagine in a fleet except for trash [hauling] trucks,” Booton says.

Roughly 40 percent of the airport’s total fleet consists of snow removal vehicles and equipment that enable it to quickly clear snow, which is a regular occurrence in Denver in the winter months. According to the National Weather Service, the city sees an annual average snowfall of 57 inches.

With roughly 678 pieces, DEN’s snow removal fleet is one of the largest of its kind in North America, Booton says.

The airport takes a three-pronged approach to snow removal. This involves maintaining equipment specifically used to clear DEN’s airside areas, which consist of runways and taxiways; landside areas, which include 195 lane miles of road leading to the airport as well as service roads and parking lots; and the pickup/drop-off areas outside of its terminal.

Approximately 50 pieces of equipment are used to clear the walkways outside of the airport’s terminal. These include brooms, snowblowers, plows and granular spreaders. In addition, the airport uses a single-operator Ventrac compact tractor with brooms on its front to clear the airport’s plaza as well as the area near its train station, he adds.

The fleet management team also works with local equipment vendors and upfitters. “We have had a good relationship with our equipment through the years,” Booton says.

Roughly 73 percent of the fleet’s total fuel use is compressed natural gas (CNG), including in buses and light-duty vehicles. CNG vehicles are required for use in the airport’s extensive network of underground tunnels, where traditional fuels are prohibited by law because of the potential for spills, Booton notes.

The airport maintains six CNG fueling stations. This year, it will add its first all-electric vehicles to the fleet. “We’re very green out here,” Booton adds. “Everyone is very conscious of the need for alternative fuels.”