Back to Features > Eye in the sky

Eye in the sky

It’s been known for a while that GPS-reliant wearables can be disappointingly inaccurate, especially in urban environments. Whether you’ve waited for your wearable to be ‘ready to run’ (sometimes up to two minutes before the device can calibrate) or had your Uber arriving on the wrong side of the street, most of us have experienced the frustration of GPS not working particularly well in a city. For personal wearables, it’s annoying and a little time consuming, however the stakes are raised considerably when location-based IoT technology is being relied upon by businesses for the purpose of logistics, asset tracking or safety.

The fact is that the design of our cities – with dense buildings, many storeys high – makes them less than ideal for GPS. Satellite signals need a straight line of sight to determine an exact location. In an open landscape, it’s rarely a problem to get a clear signal. However, in a built-up environment signals bounce off tall buildings, which in turn results in less accurate GPS readings or (even worse) low integrity GPS – where a strong reflected signal can be taken as truth, causing location-based technologies to act with high confidence despite being incorrect.

In September this year, supermarket giant Tesco announced a drone delivery trial, promising customers who ordered small items that they could expect them dropped off by drone within 30 minutes of ordering. The location for the trial, at Tesco’s Oranmore store, nine kilometres east of Galway City on the edge of Oranmore Bay, with a population of less than 5000, was significant. This rural location, with unobstructed views of the sky, means a satellite-directed journey is 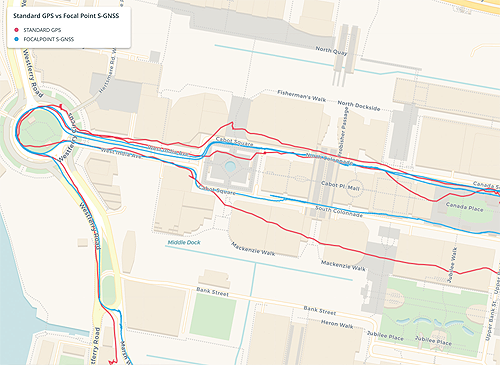 doable. But no city-dweller should count on their own drone delivery service just yet.

We have come to expect software-based approaches to improve the way that cities are managed and designed, with technology supporting better traffic and public transport management, monitoring energy usage, and linking residents and visitors to improve all aspects of life from real estate to utilities, from education to health and government services. Transportation is destined for a transformation. The logistics industry will see the complete redefinition of fulfilment and deliveries. Expectation is high, and yet the fundamentals behind how GPS works will be a major blocker to many of these possible improvements.

Core GNSS technology or GPS (if it applies to the American satellite positioning system) hasn’t changed much since the first GPS satellite was launched in 1977. Today, systems like Europe’s Galileo, Russia’s Glonass and China’s Beidou rely on the satellites orbiting the earth at 20,000 kilometres. Each satellite emits a radio signal containing a timecode and a description of the satellite’s exact position. By measuring the transmission time of the signal, GNSS receivers can determine their distance from the satellite. If the receiver can access signals of at least four satellites in its line of sight, it can determine its position in three dimensions. That’s how ships know where they’re heading, autonomous vehicles can recognise they need to take the next right turn and a drone knows to land.

The classic vision of a smart city is one with autonomous vehicles negotiating their way through the streets, avoiding collisions, communicating with each other, while ‘driverless’ trucks transport goods and drones flit through the skies with deliveries. However, each of these dream innovations require accurate, trustworthy positioning data, based on accuracy from the signal they’re receiving, and the security that the signal is being faked or spoofed.

GNSS or GPS spoofing involves the broadcasting of fake GNSS data to make a device think it is in a different location to the one where it actually is. Not only can spoofing trick vehicles and devices into believing they are in a different location, but it can also compromise any system that relies on satellites for determining the accurate time.

And, as satellites are also relied upon to broadcast the accurate time in the correct time zone, this raises a host of vulnerabilities— from ATMs to cell phone towers, stock exchanges and electrical grids. Adjusting what systems believe to be the ‘true time’ by broadcasting fake signals can potentially be catastrophic.

Improving the accuracy of signal processing and, at the same time, securing against spoofing attacks, is the motivation behind Supercorrelation technology. The patented technology uses sensor fusion, machine learning and signal processing to determine the arrival angle of satellite signals, remove reflected and non-line-of-sight signals and discard spoofed signals, thus securing the device against malicious interference.

This software upgrade, at the chipset level, enables 10x improvement in GNSS performance on devices in urban environments, including urban canyons and indoors. It’s gathering attention in the industry already. Supercorrelation was recently awarded prizes by both the Royal Institute of Navigation and the US-based Institute of Navigation in recognition of its ground breaking potential, and is expected to be in selected GNSS chips in the near future.

Whether it’s the Republic of Korea’s purpose-built Songdo International Business District, or Spain’s €31 million project to turn Malaga into a smart city, IoT solutions rely heavily on GPS to provide location-based analytics, insights and instructions. The dream of smart cities has inspired the world. However, until the accuracy and integrity of GPS is improved, until we can reduce the reliance on cameras which make AVs expensive, susceptible to theft and battery-draining, it will be impossible for smart cities to interact effectively with smart transport and reap the benefits we all are looking for.

Tom Gray is VP of Product and Marketing at FocalPoint.
Focal Point Positioning was founded in 2015 by alumni of the UK aerospace industry, The European Space Agency, Cambridge, Oxford, UCL and Imperial College. Its technologies have been awarded by the UK’s Royal Institute of Navigation and the US Institute of Navigation. It was named Europe’s Hottest SpaceTech Start-up in 2020.
https://focalpointpositioning.com