When you think of a hovercraft, you might think of flying saucers or military jets, but hover technology is actually seeing plenty of use in mainstream manufacturing. Manufacturing equipment, as well as the components of whatever is being put together, can weigh hundreds of pounds but needs to be moved with the same efficiency as a handheld item during the production cycle.

This is where hovercraft tech can become a game changer for a manufacturing facility and its workers. It presents benefits in terms of efficiency and accuracy of movement, and puts less physical a

Think of this kind of hovercraft like an air hockey puck. Pressurized air keeps it floating smoothly on a surface, and then it can be moved with barely a flick of your wrist.

Instead of a team of people moving a giant machine on a wheeled cart using all of their strength, hovercraft technology can lift the machine off 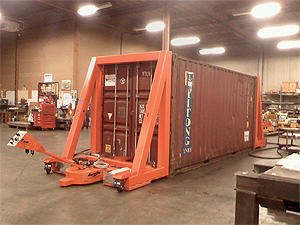 the ground using pressurized air, and it can then be guided by hand with no more physical strength than it takes to push a shopping cart. Because it is lower friction than something like wheels or a belt, it requires less force, and also enables better control for more accuracy of motion.

Hovercraft also saves space within a facility, as it is compact and low-profile Instead of increasing the height of a load by ten inches of wheel and cart, a hovercraft caster is only about two inches off the ground. Further, it can slide flat underneath the load, inflate, and then move, so there is no need for lifting the load to place it on a cart, nor for space to accommodate the turning radius of a forklift or crane.

Increasing efficiency
Hovercraft is also ideal for handling heavy yet delicate machinery. No factory floor surface is completely smooth, so it’s easy for wheels and jacks to get hung up on seams or breaks in the floor. This can cause unwanted shock to the load being moved, which is a major concern for manufacturers of sensitive machines.

Hovercraft technology, on the other hand, evenly distributes the weight of the load, like a suspension system in a car, keeping it stable, and then absorbs vibrations and other movement that could damage the machine. Remember how an air hockey puck floats flat so it can move quickly and smoothly in any direction?

Hovercraft also protects floor surfaces in a facility, which are not cheap to install and maintain. Wheels and forklifts and cranes will all tear up the epoxy of a floor, which is meant to stay as smooth as possible to facilitate movement and maintain safety. Moving 3000kgs on top of air instead of wheels saves on maintenance for the floor, and decreases downtime that would be needed for that maintenance.

And when it comes time to secure the load after moving it, whether for storage or for the next station in the production cycle simply deflating the hovercraft and letting the load come to rest on the floor will keep it in place. This is as opposed to having to lock wheeled casters in place, which still risk shaking and vibrations if not actual slippage.

Just like cars with wheels are expected to eventually be replaced with hovercrafts, like Marty McFly’s skateboard became a ‘hoverboard’ in the future, wheel-based load moving solutions are likely to be outpaced by hover technology. It not only saves time and effort, leading to higher efficiency and productivity, but it keeps the machine and the people moving it safer.