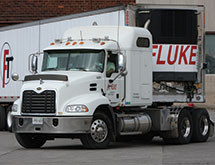 Ever since the days of the horse-and-buggy, the name Fluke has been synonymous with reliability in and around the greater Toronto area. Fluke Transport has maintained this reputation for generations, and President Ron Foxcroft says the company continues to live up to the high standards set by the Fluke family with top-notch trucking and warehousing services throughout southern Ontario. The Fluke name has become so closely associated with reliability, Foxcroft says, that the wordplay in the company’s slogan makes perfect sense to most Canadians.

“Fluke is quite a famous Canadian company, mainly because of our famous slogan, ‘If It’s On Time … It’s A “FLUKE”,’” Foxcroft says.

The company was established in 1920 to provide freight-hauling services to customers in and around its hometown of Hamilton, Ontario. When the truck supplanted the horse and buggy as the preferred method of transport, the company followed suit, and soon Fluke Transport became a leading hauler of steel and general commodities in the region. By the early 1980s, however, the woeful state of the economy had taken its toll on the entire trucking sector, and the Fluke family sold the company to Foxcroft.

Today, Fluke Transport continues to lead the way in the trucking sector in and around Toronto. The company provides freight shipping and warehousing services to a broad range of customers in the region, and in recent years has grown to serve areas outside of southern Ontario, including the United States. In everything it does, Foxcroft says, the company maintains a careful, steady rate of growth that ensures it does not stretch itself too thin and concentrates on providing service other carriers avoid.

One of the primary reasons Fluke Transport has been able to survive for more than 90 years is because it takes a careful approach to growth. Foxcroft says he has witnessed numerous trucking companies come and go over the years, many of them failing because they tried to drive sales higher too quickly and took on risks they couldn’t manage. “We try to avoid that,” he says. “We’re not a big company, purposely.”

The company has grown only by as much as its cash flow allows it at any given time, and it seeks to avoid high-risk situations whenever possible. As a result, the company has not expanded as much geographically as many younger firms, but Fluke Transport has weathered economic storms that other companies were not prepared to withstand. Foxcroft says controlling a company’s ego is essential in the trucking industry, and Fluke Transport has managed this by maintaining a close-knit, family atmosphere inside the company.

Many of the company’s employees have been with Fluke Transport for long stints, and Foxcroft says the way the company treats its drivers has a lot to do with that. At a time when finding and retaining experienced drivers is a challenge industrywide, Fluke Transport offers a schedule that has almost all of its drivers home in their own beds every night of the week. “That is huge,” Foxcroft says. “We attract the older driver, the little more experienced driver.”

Fluke Transport also offers vertically integrated warehousing services, something unique to the industry, but Foxcroft says one of the company’s greatest distinguishing features is its willingness to take on work that other companies won’t touch. Traffic in the greater Toronto area is among the most daunting in North America, on par with Los Angeles. As a result, many carriers try to avoid hauling in the metropolitan area if they can, but not Fluke Transport. In fact, Foxcroft says, the company has arrangements with numerous carriers who will drop their trailers with Fluke Transport to haul them the rest of the way into Toronto.

These advantages add up to a strong foundation for success, and it’s that foundation that will carry Fluke Transport into the future. Foxcroft says the company has no plans to deviate from its plan of steady, reasonable growth. “We’re going to stay the course,” he says.

Fluke Transport expects to continue growing by about 10 percent a year for the foreseeable future, and Foxcroft says that suits the company just fine. He says the company’s experienced leadership understands the market and leverages that knowledge into continued success.