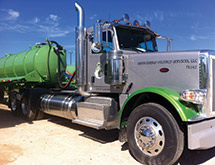 The handling of fluids in the oilfields has been the bread and butter of the company, according to President and CEO Joe Monroe, although Green Energy also offers equipment rentals, such as frac tanks. “We are a trucking company,” Monroe explains. “We’re just specialized in that our trucks are fueled by LNG and we transport oilfield fluids.”

Green Energy provides  key services associated with drilling, completion and production of oil and gas.  For every barrel of oil produced at a well there is typically at least one barrel of water, Monroe says. The oil is taken from the site by truck or pipeline and makes its way to market, but the remaining wastewater must be removed from the site separately. That is where Green Energy comes in. The company collects water separated from oil and gas production and uses vacuum trucks to haul the water to saltwater disposal facilities. Green Energy can also provide water and other chemicals to drilling locations. “We’re moving almost any type of liquid that is used or generated from an oilfield operation with the exception of marketable crude oil,” Monroe says.

The company originally targeted the Freestone Trend and built facilities in the towns of Fairfield and Marquez, Texas. But drilling and production in that area was in decline and the economics of operating were tougher than Green Energy anticipated. Half of the company’s equipment was not in use. It quickly became clear that Green Energy needed to alter its plan and develop a strategy of geographic diversification.

Operations shifted to the Eagle Ford Shale in south Texas where drilling and production of oil and gas remains strong. Green Energy opened yards in the cities of Gonzales, Asherton and Three Rivers while activities at the Fairfield and Marquez locations refocused on equipment rentals and continuing business with XTO Energy, a subsidiary of Exxon that still operates in the Freestone Trend. Because of that geographic expansion, Green Energy’s customers have grown to include Marathon, EOG, Chesapeake, Anadarko and Encana.

For an industry often criticized for its environmental record, Green Energy’s LNG-fueled vehicles offer a green alternative for energy companies. “We provide essentially zero-emission operations around the oilfields,” Monroe touts. The company’s 84 vacuum trucks are the first LNG fleet to offer oilfield services on a large scale and Green Energy is the second-largest consumer of LNG in Texas behind only UPS. “We’re truly the guinea pigs of these engines in this type of service and in this harsh oilfield environment,” Monroe says.

Being the first to utilize unproven technologies often carries an element of trial and error, and LNG fuel is no different. Green Energy has made several adjustments to the equipment and truck designs as problems were discovered. One such issue arose as the vibration of the trucks were found to be damaging the vacuum seal on the LNG fuel tanks, causing pressure to build up and forcing the vehicle to vent fuel. At one point, Monroe says, Green Energy had more than five trucks taken out of service at the same time due to the tank flaw. Since then, all the tanks on all the trucks have been redesigned and the vehicles have returned to service. Green Energy has taken further steps to develop policies and procedures for drivers that reduces the amount of fuel waste and preserves the LNG cost advantage over diesel fuel.

That cost advantage has been one of the major drivers behind Green Energy’s adoption of LNG. According to the January U.S. Department of Energy Clean Cities Alternative Fuel Report, the average LNG cost across the country was $2.68 per diesel gallon equivalent, 38 cents cheaper than a gallon of diesel. However, Green Energy operates its own refueling stations at its three Eagle Ford yards and Monroe says the savings is closer to $1.50 per gallon. “We enjoy a fuel cost advantage relative to our competitors,” he says.

The savings has helped Green Energy justify the higher capital investment in LNG vehicles while offering competitive prices to customers.