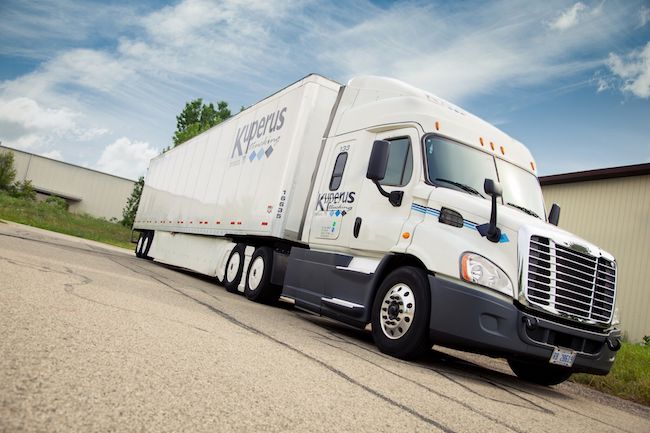 Fuel efficiency is a high priority for Kuperus Trucking.

Myles Kuperus knew the risks of starting his own trucking company when he incorporated the business in 1987. “This industry has a high failure rate because it’s capital-intensive,” he says. “I knew going into business that I had to operate efficiently, so I became passionate about fuel economy.” To help him in this journey, he made a point to listen and learn from equipment vendors, West Michigan transportation industry leaders and respected past employers.

Throughout its 30 years in business, Kuperus Trucking has invested heavily in ways to reduce its fuel costs. “We’ve done just about everything we can do from an aerodynamic standpoint on our tractors and trailers,” Kuperus says. “To us, that’s low-hanging fruit, but there are also a number of things we’ve invested in that are not aerodynamic in nature.” 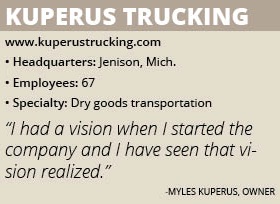 Improving safety is also a primary concern for the company and that led it in 2009 to install electronic log systems in its trucks. This decision placed the company well ahead of federal regulations mandating the use of such devices before the end of 2017. “There are many companies that haven’t even started installing electronic logs yet,” he adds.

Recent investments and adjustments made by the company to its trucks include using magnets on fuel lines, installing engine and transmission upgrades and tightening up the gap between tractors and trailers. The company also uses technology including the Omnitracs fleet management system.

Kuperus Trucking extensively tests each of the technologies and systems used on its trucks. The company’s fuel testing procedure closely emulates SAE procedures, which includes taking a “test” truck and a “control” truck on identical 92-mile runs, then comparing both the engine control module (ECM) with the weight measurements of the fuel, which gives exact fuel consumption figures. “We test every product that we purchase to ensure its fuel savings accuracy and that it offers a reasonable rate of return,” Kuperus says. “Many of the products we’ve tested proved to be less effective than marketed, and some even tested as having a negative impact.”

Within the past 14 years, the company has increased its fuel economy by 42 percent. Its miles-per-gallon average of 8.87 is well above the industry average of 6.5 mpg.

Kuperus Trucking’s fuel efficiency efforts have earned it national recognition from many in the industry including the Environmental Protection Agency’s SmartWay freight sustainability program. SmartWay recently sent a contingent of managers to tour Kuperus Trucking’s facility in Jenison, Mich., to learn more about the company’s testing procedures and fuel economy efforts. The program also awarded the company its “Top Tier of Carbon Efficiency” award.

Other industry recognitions include being twice named a Top 50 Green Fleet by Heavy Duty Trucking magazine, and earning the 2016 Heavy Duty Efficient Fleet award during the Fleet Technology Expo.

The company has also been awarded two “Carrier of the Year” awards from a large national food company. “Our customers will tell you that the thing we do better than anyone else is communicate with them,” Kuperus says. “Before there is a problem, we will tell them what that problem is, give them solutions to that problem and continually update them on modified delivery times.”

Kuperus was already a veteran of the industry when he incorporated the company 30 years ago. Having grown up on a farm, he was familiar with operating heavy equipment. He started driving part-time, delivering feed to dairy farmers and then moved on to driving a bulk milk pick-up truck. Soon after that he purchased his first truck for $800, hauling sawdust to farmers. In 1973 he bought his first semi truck and dump trailer, hauling sand 4 times a day between Franklin, N.J., and Secaucus, N.J. In 1983 he became an agent and started his own fleet.

Today, his company owns and operates 47 tractors and 126 trailers. Kuperus Trucking specializes in transporting dry goods such as food, bottled water, sporting goods, paper, containers and packaging materials to retail store warehouses. The company’s coverage area is in the Midwest, with a concentration on the Chicago, Indianapolis, Detroit and Grand Rapids metro areas.

Kuperus credits the work of his staff for the company’s ongoing success. Many of the company’s employees have been there for 10 years or longer, and it has a very low turnover rate.

“I had a vision when I started the company and I have seen that vision realized,” Kuperus says. “I am most proud of how every employee here has supported my vision of being a leader in fuel economy and emission control, and I share the awards and accolades I’ve earned with them. I know I could not have done this without their support.”