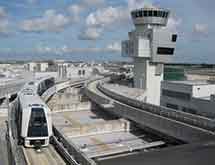 Miami International Airport handles more than 40 million passengers and two million tons of cargo annually, and it is among the nation’s busiest international passenger and cargo airports.

This background gives González special insight into the security operations at the airport. “We have been working to ensure adequate customs staffing, looking for ways to bring in more Customs and Border Protection (CBP) officers,” he says.  “We’ve also brought in kiosks for U.S. citizens and visa waiver passengers to help them move through the airport faster.”

In addition, the airport has its own police precinct and fire battalion. The airport recently spent several million dollars on state-of-the-art Rosenbauer fire vehicles. “We will build and spend whatever is needed to make sure we are as secure as possible,” González says.

Outside of security, Dr. González is overseeing the completion of a $6.5 billion capital improvement program that has added new terminals, roadways and other infrastructure to Miami International Airport and other airports in the county.

One recently completed project was the North Terminal, which was resumed in March 2006 and wrapped up this year. The airport also opened a new South Terminal in 2007, and now it is moving its focus to renovating the Central Terminal and adding more capacity to serve wide-body aircraft. The airport will also invest in the development of dozens of hardstands so heavy vehicles can be parked for significant periods of time. Altogether, these will be billions of dollars’ worth of projects that will take many years to complete.

“This is a landlocked airport, so all of the construction has to be done in phases so we can stop and start as needed,” González says. “We have to be very smart about how we work so we can sustain growth in the middle of construction.”

“We have to be out there to draw clients in,” González explains. “Maintenance is another key area, as our people constantly make sure everything works for customers.”

Other initiatives taking place at the airport include the launch of a way-finding app and an e-magazine. Miami International Airport has created a robust social media operation, and it is looking for ways to use technology to enhance its brand identity.

Another plan is for the county to launch an air show in the next few years. Miami International Airport is part of the Miami-Dade Aviation Department, which has five airports.

“There is no real air show in this part of the world, and the county has a robust aviation community,” he says. “We thought it was something we should put together.”

With many plans on the table and having created strong relationships with U.S. Customs and Border Protection, the Transportation Security Administration, Homeland Security and the Federal Aviation Administration, Miami International Airport is optimistic that it can continue to expand its operations. González says the airport will also improve the customer experience.

“Miami is a brand as much as it is a city or county,” he says. “We are the first thing and the last thing people see when they visit Miami, and we want to make a positive contribution to their stay.”