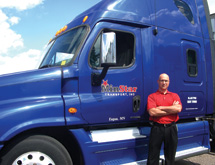 It can be difficult to bring a dream to fruition, but President Mitch Miller managed the task with MinStar Transport, his Eagan, Minn.-based logistics company. “I’ve always had a passion for transportation,” he declares. “My dream has always been to start and own my own trucking company.”

Miller founded MinStar in 2008, but has 29 years of experience in the transportation industry. He has worked as a trailer technician, in component sales, and as a manager of a fuel department and an equipment leasing division.

When Miller decided to start MinStar, it was the right time in his life to make such a venture. “Everything that I needed was in place,” he recalls. “My children were not babies anymore. I was just freeing up a little bit of time and putting it together.”

Today, MinStar operates as a dry freight carrier in 48 states, with a fleet of 115 trucks and 200 trailers. The company specializes in hauling non-stackable freight, including electronics, lighting, generators and crushable products.

Miller earned a patent for the company’s Double Deck Trailer System, which doubles the amount of freight that can be shipped in a trailer. By deploying a second floor in the trailer, the company can haul two levels of cargo.

This second floor also has the ability to be set to different heights throughout the trailer while maintaining the entire trailer width, allowing for loads with varying height requirements, Miller explains.  In addition to using these trailers for their own freight, MinStar technicians will install the systems in-house into new trailers for other carriers who are interested in using this type of system.

“Sixty-five percent of our trailers have the systems,” he says, noting that it allows MinStar to reduce costs and waste for the clients. “There’s nothing that quite compares to doubling a load.”

MinStar and its peers face many challenges, Miller says. “One thing after another makes it a little tougher to be successful in this industry,” he admits, noting that the shrinking driver pool is one example.

To adjust, MinStar has embraced innovations that drive efficiencies, including its Double Deck system. “[Those] help us get our customers,” Miller says. “We’re always trying to think outside the box [and find] better, more efficient ways to haul.  This system has continually proven that it has the ability to increase freight in a trailer load by 100 percent, while keeping the costs for the shipper down.”

MinStar coped with rising fuel costs by implementing aerodynamic features on its vehicles, he says. “One-hundred percent of our trucks are aerodynamic, as well as about half of our trailers,” he says, noting that the trailers feature EPA SmartWay and Carb compliant side skirts and SmartTruck UnderTray systems.

Another tool is Lane Analysis from McLeod Software, which gives users the ability to view their freight by lane and analyze rates, billed miles and moved miles.

A lane is defined by the origination-destination combination.  This software allows MinStar to analyze where it runs, what it makes and what it costs to go there, helping it to make better choices as to where it should go next. It can also be used to determine where to hire drivers and where to look for new customers. The result is denser, more profitable lanes, and happier customers and drivers.

After all these years, Miller is pleased with MinStar. “What I’m most proud of is that my plan worked,” he explains. “[It] grew in some of the toughest times of the economy.”

He also takes pride in the firm’s patent for the Double Deck system. “We get [a reward] out of knowing the savings that we’re able to offer our customers,” he says.

Miller predicts continued growth for the company, as well as success despite the challenges. “It’s tough on us right now with the increased regulations due to CSA and Hours of Service changes that affect us and our drivers, [but] it’s going to be fine,” he says. “We’re going to have to do more with less. [We also will] continue to develop innovative systems to drive efficiency.”