Skip to content
You are here:Home » Missouri Department of Transportation
Insights
6 min read 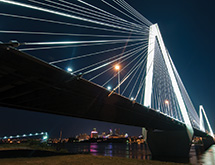 It has been a time of transition for the Missouri Department of Transportation (MoDOT), as long-time CFO Roberta Broeker took the position of interim director in May to replace retiring director Dave Nichols. Despite the changes going on within the department, however, MoDOT remains committed to its mission of maintaining the state’s transportation systems and infrastructure in the most effective and efficient means possible.

Broeker says the department is working hard to overcome the challenges facing it and do the best job possible for the people of Missouri. She says the people who work within the department won’t settle for anything less. “Our employees by and large look at the mission of MoDOT as a kind of trust that we have been given by the taxpayers,” Broeker says. “It’s not just a job; it’s a profession, it’s a calling, it’s a career.”

Even though the department has had to keep a close watch on its spending due to funding concerns, Broeker says MoDOT has been hard at work ensuring that it lives up to the high standards the department and Missourians have set for it. “Missourians are a very practical people, and they expect their state agencies to stretch their dollars as far as they can,” she says.

There is much concern nationwide about the state of the United States’ infrastructure, especially its bridges. Missouri has 641 bridges that it considers to be in “critical condition” and that number is up 50 from a year ago. Critical condition bridges are the state’s worst and with continued deterioration are just one or two steps from being closed.

Just two years ago, MoDOT completed the Safe & Sound Bridge Improvement Program that repaired or replaced 802 of the state’s worst bridges. Now, with a shrinking construction budget, the number of bad bridges is on the rise again. MoDOT estimates that to reverse the trend, it should be replacing more than 100 bridges per year, but its funding levels are only allowing for about 30. In 10 years, Missouri could have 1,500 bridges on its critical list.

Missouri has 10,376 bridges on state highways, including 209 that are more than 1,000-feet long, and more than 50 that cross either the Mississippi or Missouri Rivers.

Last year, MoDOT completed work on the Stan Musial Veterans Memorial Bridge on I-70 over the Mississippi River in St. Louis. The 1,500-foot, cable-stayed bridge was built to accommodate two lanes of traffic in either direction, but MoDOT says the bridge is wide enough to be restriped in the event that three lanes in either direction are warranted in the future. With the cooperation of the Illinois Department of Transportation on the other side of the river, MoDOT completed the project in February 2014. The department says the bridge – the first new river crossing in St. Louis in more than 40 years – creates a new gateway to the St. Louis metropolitan area from Illinois and is expected to dramatically improve safety conditions and traffic congestion along the corridor.

Another major bridge project underway is the construction of a new I-64 Daniel Boone Bridge over the Missouri River between St. Louis and St. Charles counties. The $125 million project is replacing a bridge built in the 1930s that was severely outdated for the level of traffic it experienced on a regular basis.

One project MoDOT started earlier this year was the replacement of three bridges along I-70 in Columbia, Mo. The $18 million project is replacing bridges built in 1957 that currently carry about 80,000 vehicles a day.Although the bridges are safe for travel right now, they are in need of continual maintenance and need to be replaced before they deteriorate any further, according to MoDOT. Broeker explains the project is being completed utilizing the design/build method, which has saved the department time and money by combining the design and construction phases.

Broeker says the design/build method has been one of several forward-thinking initiatives the department has implemented on projects in recent years as a means of controlling costs and increasing efficiency. “I think that innovation is one of our strengths,” she says.

Such innovations are necessary because of the ongoing funding concerns faced by MoDOT and many other state agencies across the country. “The challenge is all about the money, and this is of course not a unique issue,” Broeker says.

A statewide survey completed this summer showed that 87 percent of Missourians are willing to invest more in the state’s transportation system. But that same survey showed no consensus on where those funds would come from. In 2014, an amendment to raise the state sales tax met with defeat, and an effort to raise the state fuel tax earlier this year failed to get out of the Missouri General Assembly.

MoDOT continues to look for ways to fund its needed infrastructure improvements. When it comes to rebuilding sections of I-70, for example, Broeker says MoDOT has received conditional approval from the federal government to toll the existing highway, and the department could look at participating in a public-private partnership for any future improvements. “We do the best we can with the money we have,” she says.

The last few years have been challenging for MoDOT, with the change in leadership coming on the heels of a 2011 downsizing of the department that reduced its staff by nearly 20 percent and closed three district offices. Broeker says the move saved more than $600 million in operating expenses and that money was redirected to the road and bridge construction program. But the impact on the department’s people has been difficult.

As MoDOT searches for a new permanent director to take the helm, Broeker says it represents an opportunity to reaffirm the department’s focus on its mission. “We greatly improved the condition of Missouri’s transportation system over the last decade, proving that with adequate resources, we could deliver,” she says. “If Missourians decide they want to invest more in the state system, we’re ready to move forward and do that again. I’m looking forward to us naming a permanent director because there is excitement about the future.”