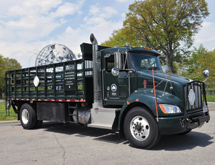 With New York City’s status as the most populous U.S. city, its support agencies need to make sure they provide the best services to its citizens. Thankfully, the Department of Citywide Administrative Services (DCAS) is there to lend a helping hand.

“It’s a $600-million-a-year operation,” Kerman explains, noting that the city has the largest municipal fleet in the country. In addition, the DCAS’s fleet operation includes 37 main repair facilities and 76 expediter facilities.

Kerman, who has nearly 20 years with the city government, has extensive experience working with the city’s fleet. For more than 17 years, “I was the assistant commissioner and chief for the citywide parks department,” he recalls.

“As part of that job, I ran the parks department’s fleet with 2,500 vehicles,” he says. Many of the practices he implemented in that role have been introduced across New York City.

During his time in his current role, the city has become a leader in fleet sustainability, he says. For example, under Mayor Bloomberg, the city has invested $425 million in multiple green approaches, including the use of natural gas, biodiesel fuel, and hybrid and electric vehicles.

“We are mandated to buy the most fuel-efficient vehicles possible,” he says, noting that all of its trucks run on biodiesel fuel. “Other than the federal government, [we operate] the largest hybrid electric fleet in the country, with over 6,000 units.”

Another initiative for DCAS is its implementation of Zipcar’s FastFleet web and wireless technologies in 580 of the city’s light-duty vehicles. The FastFleet technology allows the city’s agencies such as DEP, Health and Parks to view driver and vehicle history.

“We have a lot of information that we’ve never had before on the patterns of vehicle use, including where we’ve had excess,” Kerman says. “We are looking to place [FastFleet on more] cars.”

So far, DCAS has enjoyed a strong return on its investment in green initiatives, Kerman says. “Even through Hurricane Sandy, we’ve reduced fuel use in the last two years by 2.1 million gallons,” he says, “which helps pay for the investments we’ve made.”

Kerman is proud of how the DCAS has been able to consolidate fleet services and get agencies to work together in new ways. As part of this initiative, the department created The Fleet Federation, which is an interagency management group, and conducted over 300 inter-agency fleet meetings.

By working together, Kerman says, the federation has consolidated the garages of several departments and closed others, reducing its footprint by 10 facilities. “It’s a very aggressive program of interagency sharing,” he says.

The consolidation also allowed the city to cancel the construction of a nearly $200 million fire department garage facility and solve the need for a new garage for a police department. The former “was literally about to start,” Kerman says. “We saved a lot of money.”

DCAS also has brought more consistency to its agencies by working with the Genuine Parts Co. (GPC) as the department’s new parts source.

“They operate at six agencies and 11 garages at this point,” Kerman says, noting that GPC supplies the city’s entire inventory of auto parts.

Previously, the city’s agencies had different methods of keeping inventory. For instance, “We might have 10 different ways to track to the same WIX filter,” he says. “We now have a common parts list and approach.”

DCAS also has a similar contract with WEX Inc. as its private gas station umbrella contractor. “All city agencies are using fuel from WEX for private fueling,” he says.