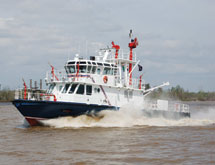 The Panama Canal – the shortcut between North and South America that connects the Atlantic and Pacific oceans – is being widened and deepened to accommodate modern oil tankers and container ships, many of which can’t currently fit through the canal’s narrowest 100-foot-wide stretches.

The $5.2 billion project on the century-old, 50-mile waterway began in 2007 and is expected to be finished in early 2016. Once it’s completed, the shipping industry – and global trade in general – stands to enormously benefit – and so does Plaquemines Parish, La.

It may be a small community – population 23,000 – but big changes are afoot, in part because of where it’s situated at the southernmost point of Louisiana. The parish (an entity analogous to a county) encompasses the last 100 miles of the Mississippi River before it reaches the Gulf of Mexico. The port’s jurisdiction is the largest in the United States in terms of land, and the newly acquired port site is 50 miles south of New Orleans. With the expanded Panama Canal expected to greatly increase river traffic, the port could be so much more, according to Maynard J. “Sandy” Sanders, executive director of the Plaquemines Port Harbor and Terminal District.

“Plaquemines Port is full of potential, but you can’t eat potential,” Sanders explains. “We’re a port, but until recently, our port authority rested within the parish government and we didn’t own any port sites.”

Following recommendations in a recently commissioned port strategic plan, the parish council separated the port from the parish government, and the port set up its own governance via a port authority and hired the port’s first executive director in August.

Sanders, a retired U.S. Army Major General and former deputy port director in Corpus Christi, Texas, directed the port’s first land purchase – 600 acres for $9.5 million – in December. But development of the land, which has 1.5 miles of frontage along the Mississippi River, is a ways off. “There won’t be a shovel in the ground for another two years or so,” Sanders says, “but buckle your seat belt when we start.”

Sanders says, “you gotta’ prep the battlefield before you start the war,” and there’s a lot of work to be done first. The U.S. Army Corps of Engineers has been authorized to improve the levees in the area to protect the investment of companies who decide to locate there. Plans to extend the New Orleans & Gulf Coast Railway to the property are underway. This five-mile rail extension would connect Plaquemines Port to six railroads to the North. In anticipation of increased congestion on the area’s road and rail infrastructure, a new bypass highway is under construction and a major rail relocation plan is on the drawing board.

Plaquemines Port is already one of the 15-busiest ports in the country in terms of tonnage: 8.5 million tons of petroleum and related products, 14 million tons of agricultural products and 28 million tons of coal move through the port per year. There is also an oilfield service terminal within the port’s jurisdiction located at Venice, La.

According to John Pennison, the port’s deputy director, the industrial corridor between Baton Rouge and New Orleans is rapidly being developed, and companies are beginning to look further south for development opportunities. “We have a lot of available land in our port jurisdiction, and many companies are becoming aware of our strategic location close to the open waters of the Gulf of Mexico.”

“Many mature ports today are restricted by urban sprawl, but our initial land purchase provides room to maneuver with plentiful undeveloped neighboring properties,” Sanders says. “Our story is what we could be. Our vision is to be the distribution center for the heartland of America.”