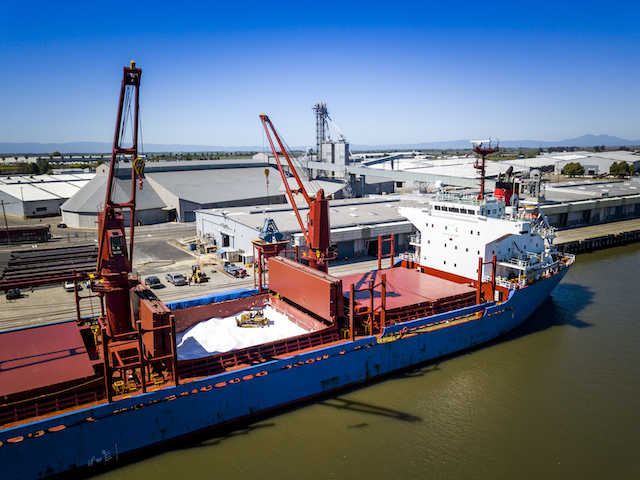 The Port of Stockton has become the largest general cargo port in Northern California.

People often associate the adage “location, location, location” with the real estate industry, but the Port of Stockton’s success shows how important a location can be to the distribution industry as well. Located in a hub of more major freeways, “We are in the geographical center of California,” Peter Grossgart declares.

Grossgart is the marketing manager for the Stockton, Calif.-based port, which features first-class warehouse storage and handling facilities for dry and liquid bulk materials, as well as facilities and equipment to handle break-bulk cargoes. The port started operations with its first vessel, the Daisy Gray, in 1933. 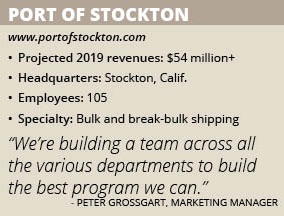 Today, “We are the largest general cargo port in Northern California,” Grossgart says, adding that the port has access to two transcontinental railroads, an international waterway and a regional airport. “We’re capable of handling anything that you could throw at a port.”

The Port of Stockton also operates more like a business than as a government agency and is in constant contact with its customers. As a result of that, “We feel we’re more in tune with our customers’ needs as we’re an operating port,” he says. “They lease their terminals to terminal operators, which is common in the container side of the world.”

It also sets itself apart by having room to grow with approximately 500 acres of available land. “If you were building a facility in Northern California, you’d struggle to find a better logistical location better than ours,” Grossgart says.

Currently, he says, the port’s warehouses are at 98 percent occupancy but hopes to have a class A facility built on the land. “We have a few entities looking at developing a bulk terminal, as well as a wood pellet mill and other cargo-related investments,” he reports.

The Port of Stockton recently made upgrades to its infrastructure, Grossgart says. This has included a new BNSF bridge over Navy Drive in Stockton, as well as the redirection of off ramps from Interstate 5 onto Navy Drive.

“We’ve also just completed the widening of Navy Drive, which is going to be the main access of the port,” he says, adding that it is currently building a four-lane bridge that will replace a WWII-era box girder bridge. “The next phase will be to build a flyover going over the main rail access to our west complex.”

This will allow the Port of Stockton to avoid tying up traffic as rail moves. “It’s also safer,” Grossgart adds.

The port also recently rehabilitated World War II-era railroad tracks that had not been used for many years. “It’s been brought up to PUC standards and we’re using that quite effectively,” he says.

Environmental initiatives have not passed the Port of Stockton by. “We were just certified as a Green Marine port, which we’re very proud of,” Grossgart says, adding that it is investing strongly in replacing its fleet of forklifts and trackmobiles with electrical equipment.

Because of the port’s focus on general cargo, “We’re very interested in the environmental impact we have and try to mitigate it if at all possible,” he says, adding that it focuses on safety as well.

Often, he says, the Port of Stockton will ship rice to Japan and Korea, which can attract rodents. But to reduce the presence of pests, the port built owl boxes throughout its location 15 years ago.

Today, “We have 20 owl boxes,” he reports, adding that each one has a breeding pair of owls that are feeding their young. “We get to use less traps and we found a better way to do things.”

The Port of Stockton is coping with challenges in its industry, which have included market shifts. Although the port has been highly dependent on construction material over the years, it saw drops in the volumes of cement during the recession.

“We literally went from right about 2 million tons to zero,” Grossgart says, noting that the port has coped by attempting to diversify its cargo, including biomass products. “It’s going to go to Japan to replace its reliance on coal and be a semi-carbon neutral solution to their energy needs.”

Grossgart joined the Port of Stockton nearly four years ago. “Coming from the private sector, I didn’t know what to expect,” he admits, but notes that he found it to be quite similar with his previous role, thanks to its strong emphasis on teamwork.

“In a lot of ways, it was an easy fit,” he says, noting that the work also provides its share of diversity as well. “Every day, it’s something different.”

Grossgart is proud of how the port recently enjoyed the best five years of tonnage in a row and has come together as a team. “We’ve got the environmental folks sitting in operational meetings as well as accounting staff,” he says.

“We’re building a team across all the various departments to build the best program we can,” Grossgart says, noting that this is rare to find at other organizations. “That process is just gaining momentum.”

The port also has become a major employer to San Joaquin County, which is considered to be disadvantaged economically. “There are 10,000 jobs that depend on the port’s existence,” he says.

“With our growth comes job growth, like family wage jobs,” he continues. “We’re really proud of that. [It’s] very important to us that we continue to thrive without imposing taxes on our community.”

He predicts more growth and diversification ahead for the Port of Stockton. “In the past four years, several of our liquid bulk tenants have expanded (or have plans to expand) their capacity,” he says. “In the next five years, we’re hoping to double our tonnage.

“People are taking advantage of our location and the road and rail networks here,” Grossgart continues. “We’ve always been more of a valley/regional port and we want to extend north, south and to the east.”

“Although we aren’t a container port like the ports of Los Angeles, Long Beach or Oakland, Calif., the Port of Stockton has capabilities that they don’t,” he says. “We attract  business that fits here because of the logistical advantages we offer.”