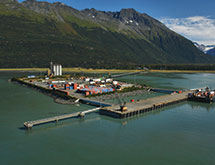 Even though it doesn’t rank as one of the state’s largest, Port of Valdez nevertheless holds a position as one of Alaska’s most important ports. As the nation’s most northerly ice-free port, Port of Valdez has the responsibility of handling cargo for most of the interior of Alaska, including equipment for the oil industry and the military. Port and Harbor Director Diane Kinney has been with the port for 17 years, and says the Port of Valdez has carved out a comfortable niche for itself thanks to its location and ability to handle cargo that other Alaskan ports are unable to.

The Port of Valdez consists of a container terminal, a grain terminal, the John Thomas Kelsey Municipal Dock and the Valdez Pioneer Field Airport Terminal. When the container terminal was constructed in the early ’80s, it was advertised as having the world’s largest floating general cargo dock. In addition, during this time Valdez applied for, and received, the first foreign-trade zone designation in Alaska. Although the zone has not been used, the port is always looking for businesses that could profit by operating in a foreign-trade zone.

Kinney says much of the traffic that comes through the port on a regular basis is barge traffic. The majority of the cargo that comes through the port is destined for the interior of Alaska, but the port also provides full access to much of the Pacific Northwest, northern Canada and the Pacific Rim. Kinney says the port handles a lot of oil spill equipment for major oil producers, freight headed for Prudhoe Bay and the state’s Trans Alaska Pipeline System, and twice a year it handles munitions loads for military bases in the interior of Alaska.

Kinney says one of the port’s primary advantages for shippers is that it has the capability to handle larger freight. Even in larger ports, such as Anchorage, the amount of traffic and their proximity to urban centers make getting large freight through very difficult. Thanks to its location and relatively low traffic, however, the Port of Valdez can accommodate larger shipments and move them more easily through to other forms of transport. “Our niche is probably oversized freight because it can come into our port and get right on the Richardson Highway,” Kinney says.

Another significant advantage the port has over other options is that it provides carriers with up-to-the-minute ice reports through the U.S. Coast Guard Vessel Traffic Center located in Valdez so vessels know exactly what they will encounter as they approach the port. Kinney says Port of Valdez understands the importance of having that type of information for ships coming into the area. “Having an ice report in Alaska definitely helps,” she says.

The Port of Valdez continues to look for ways to improve access for those who use it. Even though the port hasn’t made any major additions or upgrades to its facilities in a while, Kinney says it has found numerous small improvements that have made things easier for carriers coming in and out of the port.

For example, the port recently replaced all of its power pedestals in its yard to allow refrigerated trucks and vans more access to power. Kinney says the port sees a lot of activity in the summertime with fresh fish being moved through the port, so giving refrigerated trucks and vans more places to plug in while they wait for shipments out allows more fish to be shipped through the Port of Valdez, potentially.

Kinney says another relatively small but significant improvement the port has made in recent years was to upgrade the high-mast lighting throughout the container terminal facility. This added light makes the port’s facilities more effective at night and improves accessibility for shippers, she adds.

The port also has made improvements to its John Thomas Kelsey Municipal Dock to accommodate more cruise ships. The port’s 600-foot wooden wharf has been upgraded with a new fender system and mooring dolphin that will allow cruise ships to use the port in the future. Kinney says the port used to host cruise ships on a regular basis, but that activity had slowed down in recent years. With the improvements to the wharf and the rest of the city’s waterfront, including a new plaza area, Valdez hopes to bring cruise ships back to the port.

Not all of the recent improvements made by the port have been easy, however. Kinney says security improvements mandated by the Department of Homeland Security have placed a lot of stress on the Port of Valdez because it doesn’t have the same level of resources as many other ports across the country. “It’s been very tough for a small port to deal with all those issues, so that’s been a real challenge for us,” she says.

While other ports have the resources in place to afford the time and money it takes to hire security and meet requirements for drills and exercises, the Port of Valdez has worked to meet those security requirements through other means, such as automatic gates activated by pass TWIC cards.

Despite the challenges, Kinney says the Port of Valdez expects to see more growth in the future. A new fish cannery opened several years ago in the city, giving the economy in the region a boost, and Kinney says that the port will continue doing whatever it can to help attract more freight into the interior of Alaska.