Back to Profile Gallery > Sacaton Inc. 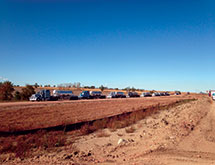 One of the leading frac sand-hauling companies in the Williston Basin, Sacaton Inc. has grown from one truck to more than 60 in just a few short years.

Over time and job after job, Sacaton reinvests in the company. It earned its first contract by demonstrating an ability to complete difficult tasks and because of its commitment to hard work, integrity and achievement. Today, Sacaton is known as one of the most reliable frac sand haulers in North Dakota’s Bakken oil fields.

Owner and CEO Dennis Stubbs hails from a construction family background. After saving up funds, he started Sacaton in November 2011 with just a single truck and a firm commitment to success.

“I thought it was going to be relatively easy, but I soon found out it was instead a never-ending struggle,” he recalls. Despite early challenges in the business, he refused to give up.

When he first started, there were a few early successes with a small truck count gain. His initial impression was that the business would be able to run itself.

“I thought it would be relatively easily,” he shares. This idea would soon be refuted and he realized he had much to learn about the industry. “I found out this was going to take a lot more time and energy than I first thought. It was not going to be easy,” Stubbs says.

Stubbs obtained his commercial drivers license and began hauling loads for other trucking companies, just scraping by for two years.

His bank account was empty and failure was a possibility.

“It looked like it wasn’t going to make it. I refused to give up. I wouldn’t let it die after so much time and money I invested,” he says. “I just never gave up.”

As he and friends “worked our tails off,” they then managed to grow the company to 13 trucks when its first large contract came in, increasing the company size to 30 trucks.

This was the big break the company had been working for. “I was out there for a long time away from friends and family. I just refused to believe it wouldn’t happen,” he recalls.

Then Stubbs had new kinds of problems. Rather than fighting to grow the company and survive, now he began the challenge of successfully managing a growing business in the booming oilfields of North Dakota.

The company now continues to grow with its clients as they go about increasing their land and drilling operations. When he was a sub hauler for other trucking companies, Stubbs was sometimes treated well and other times not so well, he says.

He determined that he would keep those good processes and drop the bad ones. For example, Stubbs treats everyone fairly, pays on time and doesn’t have a pecking order in his dispatch rotations.

Sacaton also has retained Basin Safety Consulting of Williston, N.D., to conduct random safety checks that ensure Sacaton is in compliance with all safety regulations and requirements for success. “We are very safety-minded, in line, and trained to follow protocol,” Stubbs explains.

The consulting company headed by Jon Greiner helped Sacaton rethink its entire safety operation. “That is what clients want. We follow the safety manuals to a tee,” Stubbs explains. The company’s safety focus has been a key ingredient to its success.

The CEO enjoys getting behind the wheel and driving loads himself when he can find the time. “I don’t know of too many trucking companies where this takes place,” he jokes. “This really is a fun place to work,” he relates. “The company is named after my great grandpa’s ranch in Arizona.” The name comes from the wild grass that the cattle feed off of out in the desert. Sacaton grass is known by many ranchers as the life blood of the ranch.

With oil prices declining, Sacaton is now focusing even more on cost savings and efficiencies. For example, it has streamlined its dispatch operations system. The company continually analyzes all of its processes paying close attention to each detail. “We have great systems in place and are super efficient at saving both ourselves and our clients a lot of money,” Stubbs explains. “We don’t take anything for granted. We are relentless to keep the business going and to keep everyone happy.”