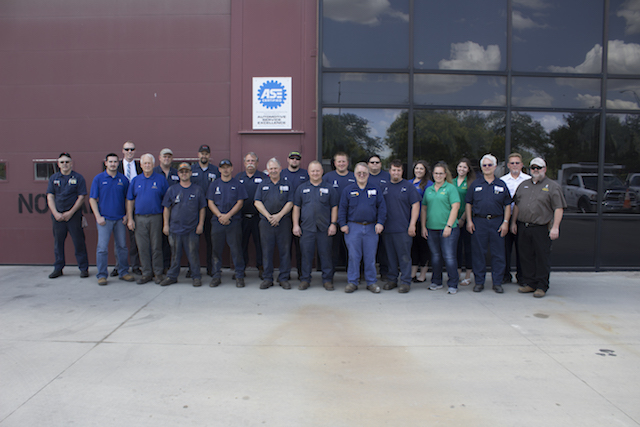 The City of Wichita, Kan., Public Works & Utilities Fleet Maintenance Division strives to get maximum result from limited financial resources. “We overcome many of our resource issues by having strong relationships with our customers and vendors, and are willing to look at things in different ways,” Fleet Superintendent Troy Tillotson said.

The division has an annual budget of $15.7 million, which funds the maintenance of 2,400 assets including fire apparatus; heavy, medium and light vehicles; police vehicles; and light and heavy equipment. In addition, the division typically receives millions of dollars annually for equipment replacement, Tillotson says. 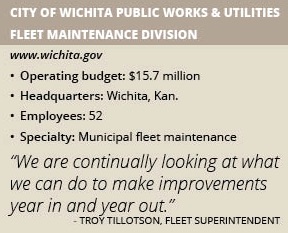 The fleet maintenance division serves every aspect of the city’s operations except for its airport and transit departments, which maintain their own respective fleets. The division operates five shops specializing in heavy equipment, light equipment, fire equipment and light vehicles, as well as a body shop.

The division in recent years has launched a number of initiatives that have improved its operations while keeping to its budget. “We are a medium-sized fleet that has, in the past, taken a one-size-fits-all approach to fleet maintenance, which is not the way to go when you have a diverse user base,” says Tillotson, who became fleet superintendent last year after previously working in Wichita’s budget office. “We are emphasizing data analytics and transparency, as well as partnerships and customer service to bridge the resource gap as best as we can without just throwing money at our fleet.”

Although the division provides many services in-house, it relies on a robust and experienced vendor pool for assistance in several areas. “This is necessary, for example, because fleet maintenance presently lacks the storage space to maintain a large inventory of tires and other parts and components,” Tillotson says. “Rapid response by our suppliers is essential to maximizing asset uptimes.”

In 2008, the division established an Automotive Service Excellence (ASE) certification program. Today, it is an ASE Blue Seal Certified operation. “The ASE certification program has made fleet maintenance far more efficient and allowed us to maintain service levels while reducing the size of our mechanic staff by more than 25 percent,” Tillotson says.

In 2016, the department, following a review of its operations by Wichita State University, developed a fleet decision support tool. The tool – which is still being implemented – projects scenarios based on replacing asset groups at different intervals over a 30-year period. Combined with an asset assessment scorecard, this will help the department optimize capital replacements by minimizing downtimes and total lifecycle costs, he adds.

The division’s efforts to increase its efficiency while still providing exemplary service to other city departments have not gone unnoticed. The division this year was recognized as one of the nation’s top 50 fleets by the American Public Works Association and Government Fleet magazine.

“This is an acknowledgment of the effort and hard work put in by our people,” Tillotson says. “We are continually looking at what we can do to make improvements year in and year out. If we stand still, we will fall behind, especially in the current data-rich and technology-rich fleet atmosphere.”

Ongoing division initiatives include creating service level agreements with the departments it serves. The first of these agreements is with the Wichita Police Department, which now has greater decision-making authority over vehicle replacements.

“Typically, a group will come in and we get some input from them, but ultimately deliver a vehicle to them based on our fleet standards,” he adds. “Asking our customers more questions about what they want or need and being less rigid about what we’re going to give them will give them a higher satisfaction level with our services.”

The division is also stepping up efforts to make its fleet more environmentally friendly. “We have mandated emissions control equipment to meet EPA standards in our specifications for many years, and own and maintain a limited number of hybrids, including heavy hybrid trucks,” Tillotson says.

The impending release of funds from Volkswagen as a result of the automaker’s settlement of a civil lawsuit regarding vehicle emissions will give the city an opportunity to further these efforts. “We will look at replacing old diesel assets and obtaining funds to build an electric charging station network throughout the community for use by the city and, with a charge, by the public,” he adds.

A Groundwork for Success

Tillotson’s goals for the division include working with Wichita’s information technology department to modernize the available technology at its central maintenance facility. “I would also like to go further with business analytics to better tell the story about the negative consequences of under-resourcing fleet replacements and operations,” he says. “A considerable amount of potential avoided costs are on the line, and failure to optimize will come with a significant long-term cost.”

The division is also stepping up efforts to gain input from its customer groups. This includes developing surveys to help it track customer perceptions as well as meeting with customers to discuss ways to improve relationships. “Further developing service provider-customer partnerships similar to our service provider-vendor partnerships will lead to a number of expected and unforeseen opportunities and gains,” Tillotson says.

Tillotson credits the progress already made by the division to its staff and city government leadership. “I would not have been able to push progress as rapidly as I have without years of efforts by others that laid the groundwork for success,” he says. “Although new technology and the accompanying bells and whistles are nice, being a good partner, cross-training to increase staffing flexibility and focusing on community and customer interests are essential elements to sustained success.”