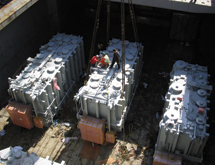 For Eastern Car Liner, shipping large cargo such as cars and heavy equipment is a cinch. “I’d describe us as a niche carrier,” COO Bill Christ says. “When most people think of shipping, it is an industry with rectangular boxes on container ships. We are in not in that type of trade. Everything is unique in our shipments; it takes extra attention if it doesn’t fit in that container box. You need to adapt and change and go where the cargo needs to go.”

Eastern Car Liner is based in Shinagawa-ku, Tokyo, and was established in 1977. Eastern Car Liner (Americas) Inc. opened its Long Beach, Calif., site in 1996 to satisfy a niche in the shipping world. The North American sister company also has a Vancouver office.

The size of jumbo tires, for one, has increased over the years and shipping volumes have increased, as well, Christ says. During a peak in the wind power industry in 2008, it delivered 212 full sets of wind turbine generators and towers. On the flip side, it ships copper, bulk commodities and logs back west to China and Japan.

It takes much planning to have proper equipment in place for arriving cargo as 120-ton cranes are used to lift cargo from vessels. Often shore-based cranes are not at the port and it’s difficult to plan their use a month or two out, Christ says, so having ships with its own cranes enables calling virtually any port needed.

But Eastern Car Liner doesn’t just arrange cargo sea voyages. Serving as a U.S. D.O.T-licensed broker since 2005, the Inland Division complements Ocean Services to round out delivery. It works in the oversized trucking business transporting oversized cargo to its final destination.

Planning oversized load shipments can be a complicated endeavor. Oftentimes, driving occurs during the middle of the night when there is less traffic. However, each state sets different requirements. California has some of the tightest regulations, requiring load diagrams to be submitted. Weight limits are tabulated per axle with distance factored in. What could be a legal load in Nevada or Texas may not be allowed in California, Christ notes.

In Japan, business is conducted somewhat differently in certain respects compared to North American habits and customs. For example, in Japan, clients and vendors do not often change. Business relationships are long-term.

“In order to lose a client’s loyalty, you have to fail in meeting their requirements,” Christ explains. “It doesn’t happen very often.”

In America, many customers will switch vendors simply for marginally lower prices. In Japan, this is much less likely to happen. Christ lived in Japan for several years and also follows these practices that he finds admirable. He says he receives frequent sales calls offering lower prices for things large and small such as Internet and accounting services, but he values relationships with current vendors. That plays a big role in his decision-making, he explains.

Japanese clients, especially in the engineering and manufacturing sectors, also have close relationships in which they share many operational details. This is even more the case when dealing with potentially dangerous business, such as oversized load shipping, so customers expect “every piece of information in a timely manner” and it is necessary “to be ready to answer all those questions.”

Eastern Car Liner is pleased a recent dip in auto sales has mostly ended. Competitively, it has an advantage as most container ships prefer to avoid the hassles of oversized cargo when supply and demand factors change. When margins become too tight, Eastern Car Liner is more willing to accept these items in place of containers; therefore, container prices are an important benchmark for the company.

The company sets itself apart by offering more flexible schedules because it can modify its basic routes for customers on an inducement or special-case basis – and that is something others can’t do, especially on the West Coast, Christ explains.

“Most other lines either operate on strict liner schedules, or as non-scheduled tramp carriers,” he says. “We are semi-liner in that we maintain generally consistent routes and schedules but can adjust to meet special client needs.”