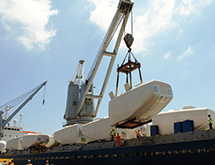 Shipping heavy cargo between Asia and the Americas is no simple feat, but it is one that ECL Americas is uniquely suited for. Since 1995, the company has handled the transport of heavy cargo including construction equipment, jumbo tires and rolling stock between ports in Asia and the West Coast of the United States. Although the type of work the company does is extremely demanding, Executive Vice President and COO Bill Christ says ECL Americas has managed to establish itself as one of the leaders of this very specialized industry. That is thanks to the integrated services it offers, its close ties to major manufacturers in Asia and its skilled professionals.

Based in Long Beach, Calif., ECL Americas is a subsidiary of Eastern Car Liner Ltd., a Tokyo-based company specializing in marine transportation of heavy vehicles and equipment. With calling ports in Long Beach; Everett, Wash.; Vancouver, British Columbia; Savannah, Ga.; and Philadelphia, the company utilizes multipurpose vessels to transport heavy cargo to and from main ports in Japan, China, South Korea and Taiwan.

Although the company’s customers include some of the biggest manufacturers in the world, Christ says ECL Americas’ customer base is relatively small and its competition few and far between. This is due to the extreme nature of the cargo the company handles as well as the demanding requirements of its customers. “Our customers are very few and very specialized, so we’re very much a niche carrier,” Christ explains.

ECL Americas might be considered a niche carrier with relatively few competitors, but that doesn’t mean the company doesn’t strive to provide the best possible service to its customers at all times. Christ says ECL Americas offers its customers numerous advantages that are aimed at helping them fulfill their shipping needs and make its logistics operations as smooth as possible.

One of the company’s greatest advantages is that, as the subsidiary of a Japanese company, ECL Americas does a lot of business with Asian manufacturers. Christ says Japanese companies have their own unique way of conducting business, and that it can be difficult for service providers from other cultures to understand the intricacies of these methods. With its ingrained knowledge of Japanese culture and business practices, Christ says, ECL Americas can make its customers in Asia feel more comfortable while working with the company. “On the ocean freight side, we’re a Japanese-based carrier, and have very good relationships with Japanese customers,” he says.

Another feature ECL Americas has working in its favor is the fact that it also specializes in brokerage for long-haul trucking as well as the marine transportation sector. By being able to handle how its shipments are carried over the road once they come off the boat, ECL Americas provides its customers with greater security and peace of mind than if they had to make those arrangements themselves or rely on an additional vendor.

Christ says the company also has strong relationships established with the stevedores at the various ports who handle the cargo once it arrives. Combined with the long-haul trucking services it offers, Christ says ECL Americas has a strong advantage over other carriers when it comes to dockside services.

One of the biggest challenges ECL Americas is facing today is the relatively small amount of cargo being shipped between Asia and the Americas compared to years past. Christ says the company currently has one vessel coming to the West Coast per month, and the lack of activity makes it difficult for ECL Americas or any other carrier to develop a significant market share. Although Christ says things are more or less stable at the moment and have been for a few years, it wasn’t long ago that ECL Americas had two vessels in operation each month.

Nevertheless, ECL Americas’ diversity and shrewd management have been more than enough to keep the company from falling behind in the marketplace. Christ says the company’s charter arrangements keep its vessels filled almost completely with cargo, with very little empty space if any on its ships. Additionally, ECL Americas’ ability to transport cargo from Asia to the Gulf of Mexico as well as the East Coast has kept it from losing customers.

This year, ECL Americas marked 10 years at the Port of Everett, and Christ says the company has enjoyed a good partnership with its last port of call and most western port. Christ says the strong bond that has been cultivated by the company with the port is evidence that ECL Americas has what it takes to remain one of the leaders in its highly specialized niche now and for years to come.