Back to Exclusive Features > Fortigo Inc. 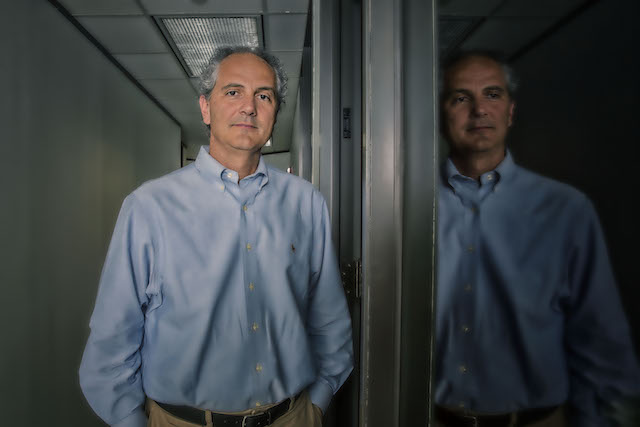 Fortigo blazed an industry trail by basing its system in the cloud.

Shippers need efficient solutions to be successful in the logistics world, and Fortigo Inc. fills that need. President George Kontoravdis co-founded the Austin, Texas-based company in 2000.

Kontoravdis, who has a Ph.D. in operations research, worked with several large companies on how to optimize their operations and set metrics. When he decided to form Fortigo, “The idea of it was to productize some of the consulting work I was doing,” he recalls. 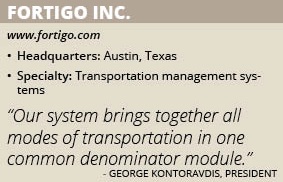 The company set out to streamline the shipping process through optimal carrier and service selection, enforcement of business rules, real-time visibility and event management. Early on, he notes, Fortigo made the decision to base its product in the cloud, which set it apart.

“In the early 2000s, it wasn’t common for large companies to trust the data in the cloud,” he recounts. But as acceptance of the cloud and Fortigo’s product grew, the company found itself in the right place at the right time.

“Because we were leveraging the cloud from the beginning, we didn’t need to overcome the challenges of moving from a traditional client service type of product to the web,” he says, adding that the company also evolved its client base over time. Fortigo initially focused on parcel shipping, but it grew into freight.

Today, “We have a full-fledged transportation management system that handles parcel, freight, air, ocean and all other modes of transportation,” Kontoravdis says. Its clients include all of the tier one airlines, such as United Airlines Inc., Delta Air Lines Inc. and American Airlines.

He adds that Fortigo’s system is a leader in the market, thanks to its ability to seamlessly handle supply chain interactions from order initiation to shipment delivery. “Our system brings together all modes of transportation in one common denominator module,” he says.

Fortigo recently invested in technology to make a hybrid platform that leverages public cloud providers with private data hosting. Since its release late last year, “It has been very well received,” Kontoravdis says.

This has been due to its flexibility to accommodate any requirements from a security or data recovery standpoint. “Each enterprise is slightly different,” Kontoravdis says.

“Something that works for one enterprise may not work for another,” he continues. “They might all have the same requirements, but there’s always something unique about them.”

One of the challenges clients have in adopting Fortigo’s system is getting vendors to adapt to it as well. “This is a major issue right now,” Kontoravdis says.

The company has focused on this for the past three years. “We’ve been constantly tweaking and making that solution as flexible as possible,” he says. Fortigo has accommodated them by making its system such that vendors can use their own portal to continue shipping the way they want.

But it also provides the vendor’s information to its system. “With one click integration, you keep execution within our ERP system,” Kontoravdis describes. “a link hooks you up to the Fortigo system. The shipper clicks that link and the rest happens behind the scenes.”

The system also can point out areas where shippers can save. For instance, if the user has multiple orders that are being sent via safe parcel, the system will ask if the shipper wants to consolidate them and automatically changes them to LTL shipments. “That saves plenty of money for our customers,” he says.

Now is a good time for Fortigo to be in business. “There’s tremendous interest in the TMS-type of technology,” Kontoravdis says, adding that large and mid-sized companies see a need for technology that provides efficiency and savings.

This has led to increased activity in Fortigo’s space, along with increased awareness of the system’s benefits. “They’re warming up to the idea that ‘I can go and get a provider like Fortigo,’” he says. “The integration possibilities also are much more robust.”

After 18 years, Kontoravdis is proud of Fortigo’s work. “Even though we’re a relatively small team, we’re able to service some of the largest companies in the world,” he says.

Fortigo plans to continue streamlining its products for its customers, particularly logistics executives. “We have all the data and intelligence in the system to make it really simple for the executive,” he says. This will allow executives to forgo the use of an analyst when it comes to data. “[We want] it to be intuitive enough for the executives to get the data they need,” he says.