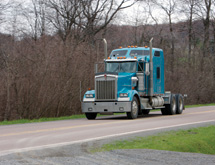 If there is anything that people want in a logistics company, it is reliability. The Weatherford, Texas-based Hearn Trucking LLC embodies that very trait for its oil and gas clients.

“[We are] positioned to provide safe and dependable service in the most active gas production areas and [are] centrally located for over-the-road transportation,” it says.

Its president, Jack Hearn Jr., represents the third generation of his family to take part in the trucking industry. Initially, he began with a single truck in 1987 and has since grown the company with new equipment based on Peterbilt power and multiple trailer types, the company says.

Today, its available equipment includes sand trailers, cement trailers, reefers, multiple sizes of flatbeds and sand doodlers. As it expanded its fleet, the company says it has acquired commercial property in Weatherford for its offices, truck yard and shop.

Hearn Trucking ensures the reliability of its services through its comprehensive drug/alcohol testing, safety and training programs. Not only does the company conduct random drug and alcohol tests, but it also requires its drivers to wear specific safety gear at all locations, including hard hats, steel-toed boots and flame-retardant coveralls.

Additionally, when it comes to recruiting drivers, Hearn Trucking only hires those with at least three years of experience with flatbed or pneumatic tankers. “Each new driver is required to accompany a senior driver on ride alongs for at least two days,” the company says.

Through its work, Hearn Trucking supplies a vital business: the natural gas industry. According to the American Gas Association (AGA), natural gas accounts for nearly one-fourth of the energy used in the United States.

Additionally, because of its efficiency, cleanliness and reliability, it is becoming increasingly popular. “Consumption of natural gas will increase 11 percent by 2030, according to the U.S. Department of Energy,” AGA says.

It adds that 98.5 percent of the gas used in the United States is from North America. “The 2.1 million-mile underground natural gas delivery system has an outstanding safety record,” it says.

Based in Washington, D.C., AGA says it represents more than 200 local energy companies that deliver clean, natural gas across the United States. “There are more than 71 million residential, commercial and industrial natural gas customers in the [United States], of which 92 percent – more than 65 million customers – receive their gas from AGA members,” it says.

ATA notes that the back-to-back increases in both months were the best gains in 2012. “Despite the solid monthly increase, compared with December 2011, the SA index was off 2.3 percent, the worst year-over-year result since November 2012,” the association notes.

ATA Chief Economist Bob Costello added in a statement that December 2012 was better than anticipated. However, in December 2011, the index rose 6.4 percent from November 2011. He anticipated more sluggishness in 2013.

“As paychecks shrink for all households due to higher taxes, I’m expecting a weak first quarter for tonnage and the broader economy,” he commented.

Based in Arlington, Va., ASA says it is the largest national trade association of the trucking industry. “Through a federation of other trucking groups, industry related conferences and its 50 affiliated state trucking associations, ATA represents more than 37,000 members, including every type of motor carrier in the United States,” it says.