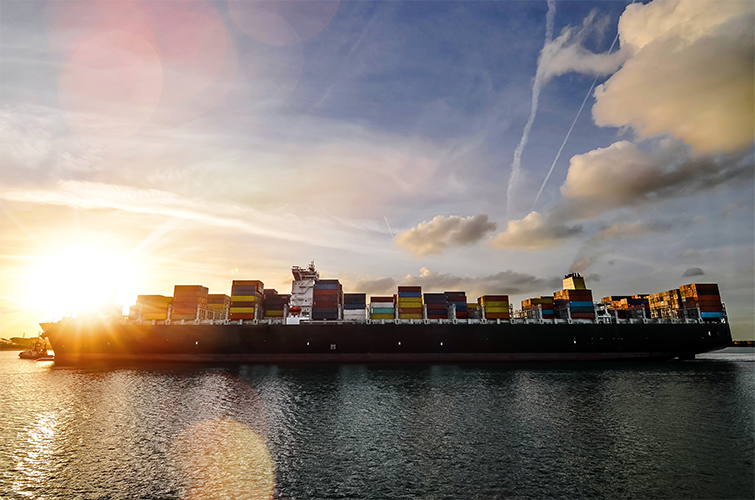 The international shipping industry is responsible for the carriage of around 90 percent of world trade so the safety of vessels is critical. As one of the leading shipping insurers, Allianz Global Corporate & Specialty (AGCS) constantly monitors and analyzes risk scenarios in the shipping industry. 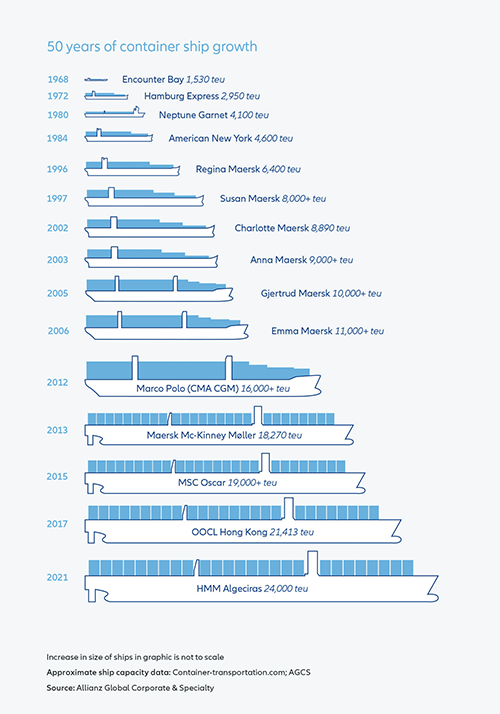 at 49 compared with 48 a year earlier. This means annual shipping losses have halved over the past decade (2011 – 98), although 2020 represented the first time in five years that losses have not declined, suggesting the loss total could be stabilizing around the minimum achievable level.

As the Suez Canal incident demonstrated, ever increasing vessel sizes continue to pose a disproportionately large risk with costly groundings, fires and record levels of container losses at sea. The canal blockage was estimated to have affected an estimated $9.6bn of goods each day, or around 12 percent of total world trade. The latest in a growing list of incidents involving large vessels, the Ever Given has added to concerns in the industry that the risks associated with large ships may soon outweigh the benefits.

We need to look more closely at how we can minimize the risks of mega-ships, especially in ports or in bottleneck passages like the Suez Canal or the Panama Canal, given the disruption we have seen that grounding incidents can cause. If a ship runs aground in one of these waterways, specialized tugs would be needed and the port and canals should have access to adequate resources in relatively short time.

Container ships, car carriers and bulk carriers have grown larger in recent decades as shipping companies seek economies of scale and fuel efficiency, a trend that is likely to continue with climate change and the introduction of greenhouse gas emissions reduction targets for the industry.

Despite the Covid-19 pandemic, ever-larger vessels are on order. In December 2020, Ocean Network Express ordered six new container ships with capacity in excess of 24,000 teu. The HMM Algeciras, introduced in April 2020, is currently considered to be the world’s largest container ship with capacity of just under 24,000 teu.

While economies of scale have helped drive the trend for larger and larger vessels, there have been unintended outcomes. The different consequences of larger vessels are now becoming more apparent, including impacting supply chains. Large vessels and the ports required to handle them present a massive accumulation of risk, while the costs are disproportionately greater when things go wrong.

For a number of years insurers, including AGCS, have warned about the growing risks associated with larger vessels. Insurers have already seen a number of very large claims from fires and groundings for large container ships as well as fire and stability issues for car carriers. Large ore carriers have also seen losses while the grounding of the cruise ship Costa Concordia remains one of the most expensive marine insurance losses in modern times at almost $2bn. The Suez Canal Authority has sought around $600mn from the Ever Given’s liability insurer and the Egyptian government detained the vessel as it negotiated with insurers. A compensation deal was eventually signed in July 2021, leaving the vessel free to leave the waterway.

More recently, the industry is seeing the biggest spike in lost containers at sea in seven years. Large claims from container ship fires and groundings, as well as the loss of thousands of containers at sea, all have one common thread – the increasing size of vessels.

Port infrastructure has not kept pace with the increasing size of vessels. While approach channels to existing ports have been dredged deeper and berths and wharfs extended to accommodate ultra large vessels, the overall size of existing ports has remained the same. As a result, ‘a miss’ can turn into ‘a hit’ more often for the ultra large container vessels. Last year, a container ship collided with another vessel and a dock crane in the port of Busan due to insufficient ballast water1. 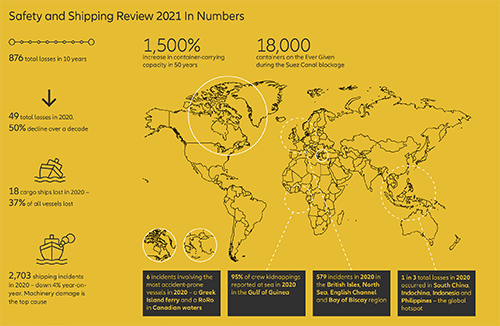 In the case of the Ever Given, had the vessel not been freed, salvage would have required the lengthy process of unloading some 18,000 containers, requiring specialist cranes. The wreck removal of the large car carrier, Golden Ray, which capsized outside the US port of Brunswick with more than 4000 vehicles on it in 2019, has taken well over a year and cost insurers several hundreds of millions of dollars. The complex salvage operation, which has required the vessel to be cut into sections in situ, has been plagued by delays from Covid-19 infections, winter weather, fires and chain link failures.

Very large container ships and other large vessels are a volatile risk for insurers to underwrite and will increasingly require more and more input from risk consulting and claims. As exposures grow, insurers will have to ask if they are able to insure some types of large vessels, or if they can only be underwritten as part of a mixed fleet. AGCS is undertaking analysis of losses involving large vessels by size and type to identify areas of potential volatility and to better understand the potential loss.

Fire claims increase
The number of fires on board container ships has increased significantly in recent years, which may in part be a reflection of their increasing number in the global fleet – 2019 saw a record year (40 cargo-related fires or one every ten days)2.

In 2020, the number of incidents fell slightly, but was still above the average, according to the Norwegian Association of Marine Insurers (Cefor)3. The Cefor statistics found no reduction in large loss frequency for container vessels, despite a substantial reduction in claims frequency and cost for hull claims overall in 2020. Container ship fires were especially prevalent, with a notable increase in the frequency of fires costing over $500,000.

Vessel size has a direct correlation to the potential size of loss. Car transporters/RoRo and large container vessels are at higher risk of fire with the potential for greater consequences should a fire break out, according to Cefor analysis. The larger the number of containers on board, the higher the probability that at least one could ignite and cause a fire, and the harder it is to contain and extinguish the fire.

More details can be found in AGCS’ annual Safety and Shipping review available from its website: https://www.agcs.allianz.com/news-and-insights/reports/shipping-safety.html.

Captain Rahul Khanna is Global Head of Marine Risk Consulting at Allianz Global Corporate & Specialty, a leading global corporate insurance carrier and a key business unit of Allianz Group. It provides risk consultancy, Property-Casualty insurance solutions and alternative risk transfer for a wide spectrum of commercial, corporate and specialty risks across ten dedicated lines of business. Its customers are as diverse as business can be, ranging from Fortune Global 500 companies to small businesses, and private individuals.
www.agcs.allianz.com