Back to Features > Logistics Security 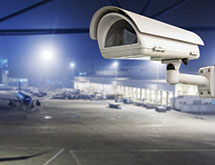 Ports and terminals are the critical arteries of the U.S. economy. In 2012, more than $17 trillion dollars of goods traveled via truck, rail, water, air and other transportation modes, and this number is forecast to grow to $39 trillion by 2040. Many of these goods travel through American ports and terminals.

Those seeking to disrupt commerce know how critical ports and terminals are to the economy, be they terrorists, thieves or disgruntled employees.

There are a variety of IT-related threats that can hamper a port or terminal’s operations, but three appear more frequently than others. IP-based video surveillance systems can significantly reduce the probability of a breach. However, these systems can be complex and place additional loads on a port or terminal’s network. IT teams are increasingly turning to wireless networks, but often deploy “generic” networks that fail to take into account workflow patterns of employees and the unique challenges of designing and deploying wireless networks in a marine terminal. IT teams that stay on top of these issues, whether through internal resources exclusively, or including assistance of outside systems integration expertise, can dramatically reduce the probability of a security breach due to network or video surveillance system downtime.

Downtime at a port of any size can cost port operators tens of thousands of dollars an hour.

Set It and Forget It Mentality

Many managers consider the video surveillance system as a check against crime or terrorism. In addition, a system can also ensure employees are following safety rules and potentially reduce workers’ compensation issues. Managers typically structure an active or passive approach to monitoring these systems. An active approach includes a full-time security team continuously viewing live video footage for criminal or unsafe activity. A passive approach consists of viewing video footage after an event, hoping the system captured whatever incident occurred. Given the cost of a full-time security team, many port or terminal managers default to a passive approach. It is important to note that real time video analytics can assist in supporting the passive approach. Video analytics if used properly can produce events and trigger alarms to allow operators or the security team to view live video happening in real time which helps minimize labor efforts.

Managers sometimes will set up a video surveillance system, assume the system is archiving video back a specified time period and then move on to another project. The unfortunate result is often that the system does not capture video of a critical time period due to lack of storage or another problem with the network – the “set it and forget it” mentality.

One solution that makes a passive approach more feasible consists of involving an outside resource to monitor performance of the video surveillance system and network. This managed services approach ensures port or terminal IT people know if there is a technical issue with their network or video surveillance solution, enabling them to effect repairs immediately.

•Continuous review of key system events, such as backup logs, and server events;

Today’s IP video surveillance networks can provide very sharp video and operate 24/7. But, the sheer volume of data such a system produces can quickly overwhelm a port or terminal’s servers and storage, resulting in downtime throughout the entire facility and/or lost video data.

When planning deployment of a video surveillance system, managers should involve the entire IT team to understand the architecture, capacity, bandwidth and current loads on the network.

Prior to rollout and periodically once up and running, managers should test the network to ensure stable, high-quality performance, and upgrade routers, servers or other devices that have the potential to become bottlenecks. Especially important: managers should test storage capabilities, both on site and online to ensure teams can pull up video from as far in the past as necessary.

‘One Size Fits All’ Wireless Networks

Ports and terminals increasingly rely on wireless networks for mission critical applications; a trend that is only going to increase in the years ahead. Deploying an outdoor wireless network requires much more than deploying access points to ensure there is wireless coverage and client connectivity throughout the facility.

Ports and terminals managers are often not focused on unique wireless design considerations and instead focused on the cost of infrastructure. Too often the client devices on the network do not have an antenna gain that is strong enough to overcome operating in deep container canyons. The client device can receive the signal from the wireless network, but cannot successfully get the response back to the network due to signal interference, multipath and a weak client antenna.

The result is an excessive number of retry and acknowledgment traffic on the network that adversely affects performance for all of the clients on the network. In essence the client connectivity challenge generates self-inflicted noise on the wireless network for every client trying to do their job. Today’s terminal operators are continuing to deploy more mission critical, data intensive applications on mobile clients including OCR and DGPS applications. These applications depend on a balanced wireless network architecture coupled with bridge technology on the client side to create a client connectivity ratio that delivers reliable performance throughout the terminal operating area.

Managers are too often focused on infrastructure costs when they should be factoring in the cost of downtime. Frequently, the cost of even a short period of downtime far exceeds the cost of designing and deploying the appropriate wireless network and client performance architecture for their operating environment.

Another cause of substandard wireless network performance centers on coverage density. Most wireless networks designed for ports and terminals provide even bandwidth throughout the facility. However, there are frequently concentration points that require more bandwidth. These points might include where vehicles gather at certain times of day or where the office of the facility is located.

When architecting and deploying a wireless network, managers should start with a traffic study that analyses how people use the facility; where they congregate and what their bandwidth requirements are, for example. They should also focus on more resilient design when evaluating the cost of a wireless infrastructure project.

Staying One Step Ahead

Buffeted by a recession that caused IT budgets to be slashed, combined with an increasing variety of potential threats, IT managers at ports and terminals must continuously identify and analyze the most critical threats and build the networks and video surveillance systems to mitigate them.

Avoiding the “set it and forget it” mentality, assisted through a managed services approach; ensuring continuous network uptime and creating more resilient designs for wireless networks can go a long way to ensuring the IT holds up its part of the overall security equation at today’s ports and terminals.