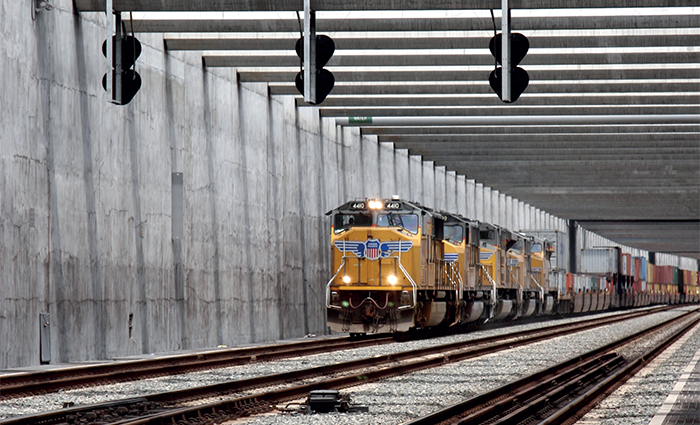 The Alameda Corridor is a 20-mile freight rail expressway owned by Alameda Corridor Transportation Authority (ACTA). It connects the ports of Los Angeles and Long Beach with the transcontinental mainlines of the BNSF Railway and the Union Pacific Railroad that begin near downtown Los Angeles, California.

While rail services in the region had been in operation for over 100 years, when containerization and intermodal shipping took hold in the 70s and 80s, volumes drastically increased. In 1980, when volumes really started to pick up, there were three Class One railroads serving the two ports: Union Pacific, Southern Pacific and Santa Fe. At that time, the railroads ran circuitously through the local communities at ponderously slow speeds. Not only were the trains noisy and ugly, but the vast quantity blocked local streets, holding up the traffic as they passed through the crossings. 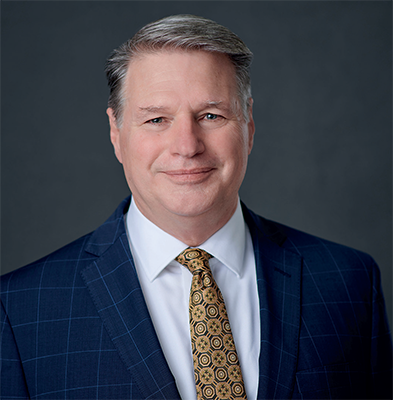 At the same time, because of the growth in rail volumes, the Ports of Los Angeles and Long Beach were proactively planning how best to handle the increase in demand on their services and looking at efficiency improvements for their landside transportation system. They were assessing how to get the trains and trucks in and out of port without the train traffic blocking the trucks. Michael Leue, CEO at ACTA, describes the corridor’s history further: “It became obvious that a separation program would vastly improve the landside transportation system within the Ports, but we also needed to address a bigger issue out in the communities. In collaboration with the Southern California Association of Governments (SCAG), the ports formulated the Alameda Corridor, and part of that formation was the Alameda Corridor Transportation Authority. ACTA was set up as a joint power of authority of the cities of Los Angeles and Long Beach, and together ACTA, SCAG and the ports developed a plan to address the community impacts.

“The Alameda Corridor replaced the three historic low speed rail routes with a single high-speed low impact route.” It was a 20-year planning effort. The ports negotiated a deal with the railroads to buy their right-of-way. All three routes were purchased, and as part of that agreement, the railroads were required to use the new consolidated route and pay a fee for every container that moves to and from the ports by rail.

A gateway for goods
“The former Southern Pacific route, running adjacent to Alameda Street, was a fairly direct line, so that was the one chosen for development. Bridgework was carried out to separate the road from the rail traffic. At the north end of the Corridor, the project provided grade separation of the rail traffic itself into light rail and heavy freight rail. Approximately ten miles of the mid-corridor is below street level, helping to remove its negative impact on the surrounding communities and take the trains out of sight. The track emerges from the trench once it nears the port.”

The completed corridor is a vital gateway for goods, serving the entire United States. It is a high-speed, high-capacity line. While port planning usually accounts for a horizon of 30 to 35 years ahead, the corridor was built with greater longevity in mind. As such a substantial and unique development, it would be practically impossible to add to its capacity further down the line. While growth has slowed at certain points, from a long-term planning perspective, the ports’ rail requirements will be met by the planned capacity of Alameda Corridor for the foreseeable future.

Construction was completed and the corridor was opened for operations in April 2002, and ACTA is celebrating its 20th anniversary of operations this year. In that time, the corridor has moved more than 55 million 20-foot-equivalent units (TEUs) and removed more than three billion truck miles from regional highways. The Alameda Corridor eradicated over 200 at-grade crossings where traffic idled, waiting for trains to pass, and, as a result, it’s estimated that CO2 emissions have been reduced by 4500 tons.

With 40 years of leadership and rail industry experience, Michael leads ACTA in overseeing operations, performing maintenance, environmental safekeeping, serving as a good neighbor to local communities, tracking cargo movements and collecting revenue payments. As he explains: “Prior to joining ACTA, 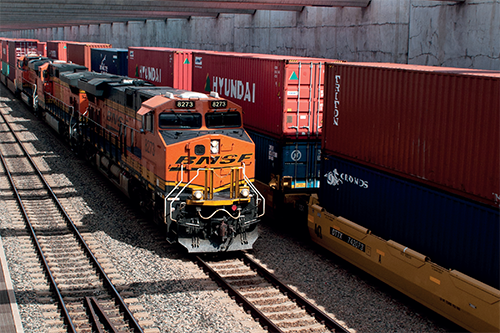 I worked as a consultant to the ports. That work meant I was heavily involved with ACTA, through 20 years of rail master planning in San Pedro Bay. I have been the CEO of ACTA for three years and joined in the midst of a global crisis.”

“During that time, the ports got a lot of attention for shipping backlogs and terminal congestion. However, often overlooked was the fact that they were moving record volumes of cargo, amidst a pandemic, with all the associated risks and challenges. That said, we do need to dissect what happened over the last couple of years, as we want to make the system more resilient.”

Freight forward
“Following lockdown at the beginning of 2020, the industry was hit with a sudden surge in cargo demand that nobody expected. Being able to respond to that was a big challenge. It really was a test for the West Coast ports. Since then, there have been some concerns over longshoremen labor agreements, and as such, the goods movement industry migrated some cargo to the East Coast to mitigate risk from those issues. My hope now is that as we get through what happened, we can really start to bring some semblance of the fundamental cost management back to the supply chain.”

Safety first
While there is no public transit on the Alameda Corridor tracks, Michael is keen to highlight the organization’s focus on safety. “We address safety in a number of ways. Firstly, maintenance is essential, and having sound tracks is important for safe operations. For the areas in the trench, we have ladders stationed at regular points to allow for crew emergency evacuation. Those ladders equally provide access to emergency response teams. We work with those local teams and conduct drills on an annual basis. We also have our rail management control center that coordinates communications between train crews, the dispatchers, the maintenance crews and the emergency response, so we are well prepared with drills and systems to be able to respond. Finally, we are focused on public safety. We maintain fencing along the right of way and the top of the trench, and along with signage, we try to protect the public from putting themselves in harm’s way. Additionally, we have cameras and intruder alarms so we can respond if someone is in a dangerous situation.”

Indeed, maintenance is ACTA’s primary investment, and the maintenance programs enable reliability and capacity of service. As Michael explains: “The high volume of traffic and extraordinary tonnage over the tracks need to be constantly assessed. As such, the maintenance budget is pretty consistent, and in the region of $10 million annually.

“Furthermore, we continue to collaborate with the ports, and have some ongoing projects with the California Department of Transportation surrounding rail enhancements and highway improvements. For example, the Port of Long Beach is currently working on their Pier B project to facilitate on-dock rail operations and improve the efficiencies and capacities of dock carriers. We are engaged in that development, and that is just one example of the work the ports carry out to continue to develop their rail capacity. Their rail enhancement programs define the requirements for meeting upcoming growth. Whereas the Alameda Corridor had to be built with the end in mind, the ports continue to develop their infrastructure as growth occurs. The Los Angeles and Long Beach Ports are doing great work, continuing to plan and working proactively to grow capacity. The corridor itself has ample capacity for the projected volumes, and we are in good stead to handle those projections,” he concludes.
www.acta.org