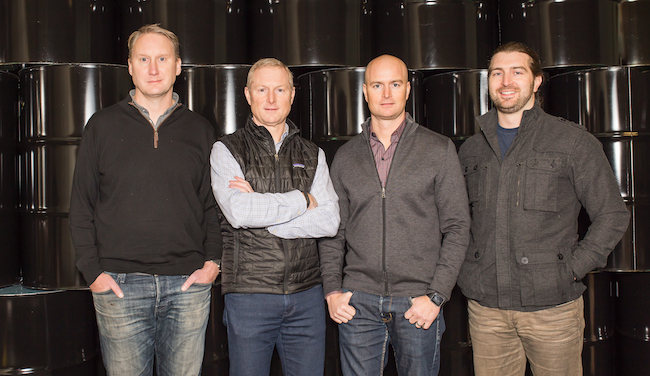 Most family businesses have a clear line of succession, with each generation taking over seamlessly from the one before it. For Myers Container, however, keeping the company going for a century has required a major commitment and investment from the past two generations of its family owners.

“We’re a 100-year-old company in its fourth generation, but the company has left the family and come back a few times,” CEO Kyle Stavig says. Portland-based Myers Container manufactures, reconditions and recycles 55-gallon steel and plastic drums and intermediate bulk containers (IBCs) used in a variety of industrial applications. 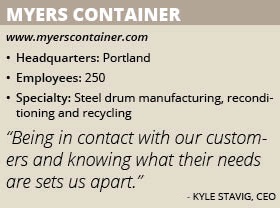 In 2005, Stavig, at that point the company’s president, began implementing lean manufacturing principles throughout Myers Container’s operations. The company at the time was experiencing financial difficulty, but Stavig’s use of Toyota Production System methodologies turned it around in 18 months. “We made significant changes; we were able to reduce our working capital by 70 percent,” he says.

Stavig first learned about the Toyota method through an Oregon-based consortium of companies, which mentored him on how to lead continuous improvement efforts.

Although his partners were happy with the company’s turnaround, they were less pleased with the amount of change Stavig brought to Myers Container. “They told me they loved what I’d done, but I needed to stop the lean stuff because it was too much change,” Stavig notes.

Unwilling to back away from the positive changes the Toyota methods brought to the company, Stavig asked his father for advice. Rather than see his son leave the company, the elder Stavig suggested that Kyle should buy it.

In 2007, Kyle Stavig approached his brothers Cody and Christian, who both had successful careers at Intel and had not previously worked at Myers Container, about buying the company. The three, along with their brother-in-law Dan Roth, then acquired the company. “We went out and earned our own equity, and remain very disciplined in what we do,” Stavig says. “We want to grow the company, and to do that, we have to have continuous improvement – that’s the secret sauce for us.”

Stavig continues to bring continuous improvement methods to the company. In 2017, he traveled to Japan to study the Toyota Production System and gain a deeper understanding of the automaker’s systems.

Myers Container’s commitment to continuous improvement, as well as its commitment to quality and customer service, has allowed it to distinguish itself in its industry. “Our product is a commodity product, so what differentiates us is our quality and ability to serve our customers,” Stavig says. “As a family owned business, we are dependent on our customers being happy – that allows us to compete against companies that are larger than us and that don’t have local ownership. Being in contact with our customers and knowing what their needs are sets us apart.”

Though the Stavigs and Roth encountered difficulty during the Great Recession just after taking over Myers Container, the company today has rebounded as a result of the family’s tenacity as well as its continued use of lean methods. “We thought we lost everything in 2008 during the recession and went a year-and-a-half without income,” Kyle Stavig says. “In 2010, when we were turning things around, our bank came to use and told us we weathered a ‘100-year flood,’ and asked if we were interested in buying more companies.”

Myers Container manufactures drums on a just-in-time basis. Customer orders are typically received three days prior to production. “The products we make today will be shipped by tomorrow,” Stavig says. “Everything we do is custom, and not stored in a warehouse.”

The company’s manufacturing processes include cutting, welding, forming, painting and coating. Drums move along a conveyor line through each process. “We run our equipment in a methodical manner, and make sure our processes are aligned and robust,” he adds.

After production, drums are placed immediately onto a trailer and then shipped to customers. The company manages a fleet of 400 trailers it uses to deliver drums to customers as well as pick up drums for reconditioning. Myers Container’s delivery and pickup model differs by location, since it uses both leased as well as outsourced trailers and tractors. The company also employs its own drivers and uses third-party drivers. “We constantly evaluate and adjust our logistics model based on our service level and cost,” Stavig adds.

Sustainability is at the heart of Myers Container’s manufacturing processes. The company reuses water generated from its processes and collects and recycles most of the raw materials it uses, among other practices. The company’s sustainability practices have earned it awards from state and industry organizations, including an Oregon Governor’s Award.

Myers Container’s manufacturing staff is regularly trained on ways to improve all of the company’s processes. The company’s six facilities run a total of 36 one-week lean events each year. One recent event, in the Charlotte facility, focused on ways to reduce scrap and safety incidents. As a result of the training, the company increased its productivity and reduced scrap and safety violations by 50 percent.

“Human development is the thing I’m spending most of my time on,” Stavig says. “We are taking our team members, developing them and having them solve interesting problems.

“Our goal when we run a rapid improvement event is to see positive change in our organization,” he adds. “When people see that they were able to take on a huge project and make the company better, they talk to others, who then want to be a part of these events.”