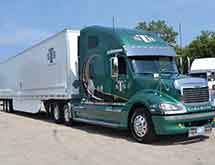 When delivering mass-market merchandise, operating at high efficiency is critical. With its innovative and integrated systems, NTB is delivering for its customers with the highest efficiency. “In our database, we have the ability to not only evaluate fuel economy by truck and drive-line configuration, but we also are able to parse the data in such a way that we can evaluate fuel economy by trailer,” President Henry Schwarz asserts. “So we make adjustments to a trailer by changing out our brake system, our tires, suspension, aerodynamics – we’re able to measure what the effect is in regard to that.”

Schwarz’s son, Dan Schwarz, has his own engineering firm that has done work for NTB, developing a rail guard system to improve trailer aerodynamics. “We designed and manufacture our own dual directional spring systems for the skirt material, so that it’s pretty much impervious to corrosion and far more robust than the system in the marketplace. It will retract at a 45-degree angle in either direction without injury. So if you turn a corner and hit a snow bank, it will fold up underneath and come back to normal position once it is no longer in contact with the snow bank.”

Instead of using auxiliary power units, NTB’s trucks are equipped with three batteries that were developed for storing solar energy. “They’re larger than a regular battery,” Schwarz explains. “Instead of storing the typical 400 kilowatts, those batteries can store 1,135 kilowatts and run the truck’s sleeper air conditioner for up to 18 hours. We use an electric compressor that powers the air conditioning.”

“For winter operation, we use a hydronics heater that is used to heat not only the cab, but we use heaters in our fuel tanks, so it warms the fuel, as well as heats the engine. Then we have timers built in to turn that on anywhere from one to two hours ahead of time. So when the driver comes in to work, the cab is heated to 70 degrees – or whatever he set the thermostat at – the fuel is heated up, and the engine is at 160 degrees. So the driver hops in the truck, turns the key and drives away like it’s summertime. Then we developed a control interface so that the controls that manage the system – whether it is heat or air conditioning – are the same controls that manage that system if the engine is running. It’s all integrated so it is set and runs whether the truck is running or off.”

The majority of what NTB transports is fresh, frozen or dry food products. Approximately 25 percent is general merchandise. The company’s fleet of 240 class 8 company-owned semi-tractors are all operated by company employees. The company also owns 880 trailers, made up of 682 53-foot-long, high-cube dry freight vans

and 198 refrigerated freight vans. In the spring of 2014, NTB opened satellite terminals in Stanwood, Mich., and Pleasant Prairie, Wis., to service key customers. NTB is a truckload carrier.

The company does its own preventive maintenance in Lansing and Stanwood, Mich.; Tipp City, Ohio; and Pleasant Prairie, Wis. “We are capable of doing all levels of maintenance on the trucks, trailers and reefers,” Schwarz says. The company also assembles gliders for its own use. “We remanufacture all of the components so they look and operate like a new truck. We’re in the process of constructing another group of gliders. When we’re completed, we’ll be at 240 tractors, and about 191 of those will be gliders.”

The tractors have PeopleNet in-cab communication systems. “One thing that is unique with us is that our core dispatch system is fully integrated with the PeopleNet system rather than running side-by-side, which is more the norm,” Schwarz says. “This allows us to communicate to the truck any operational data that is necessary for them to accomplish their task. It gives them their dispatches and has the ability to download GPS data from origin to destination.”

Schwarz attributes the company’s success to being service-oriented. “Our mission is rooted in service,” he emphasizes. “Our entire group is dedicated to that.” With the exception of one newer position, the senior management has been with NTB for 19 to 30 years. “From the standpoint of their commitment to the company, these guys are not self-serving,” he says. “They work extremely hard, and they do it for the good of the people that they serve.”