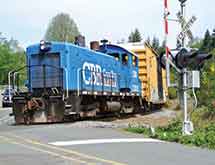 The Oregon International Port of Coos Bay, port district for Oregon’s bay area, in 2009 took a giant step to improve economic opportunities in the southwest region of the state when it purchased a freight rail line that had ceased operations two years prior. After four years of infrastructure rehabilitation and an investment of more than $41 million, the 134-mile Coos Bay rail line was returned to service as Coos Bay Rail Link-CBR in late 2011.

CBR handled 7,509 revenue rail carloads or the equivalent of 24,780 truckloads of cargo in 2014, up from 4,845 carloads or 16,000 truckloads in 2013, and 2,480 carloads or 8,200 truckloads in 2012. The line serves Coos, western Douglas and western Lane Counties on Oregon’s south coast, linking the Coos Bay harbor and industrial operations in the region to the North American freight rail system at Eugene, Ore.

“Acquiring and rehabilitating the rail line was a big deal for the harbor and local industry,” says Martin Callery, chief commercial officer for the port district. “That project involved the efforts of a lot of people, and the port had great support from the community, state and federal legislators, the marine industry and regional industrial operations. Rehabilitating the line has been a victory for the region and will be the catalyst for growing maritime commerce through Coos Bay.”

The rail line project is just the most recent planned strategic improvement involving transportation infrastructure serving the harbor, which currently has three active terminals owned and operated by private parties. The district serves as a non-operating entity that oversees development at the port and also acts as a facilitator for cargo inquiries. “I handle calls regarding shipping various commodities that I pass on to the appropriate terminal that might have the opportunity to move that cargo,” Callery notes.

Terminals in Coos Bay handle roughly 50 vessel calls and up to 2.1 million total tons of cargo annually, with manufactured forest products including lumber, plywood, particle board and wood fiber being the primary cargo movements. Wood fiber is handled in both whole log and wood chip form. Products are shipped to Japan and other Asian/Pacific Rim destinations.

Future growth opportunities include a proposed private-sector development of 500 acres into a liquefied natural gas (LNG) terminal owned and operated by Calgary-based Veresen Inc. The terminal, dubbed Jordan Cove LNG LLC, is awaiting various final permit approvals by the Federal Energy Regulatory Commission and several Oregon agencies. If approved, construction of two LNG tanks, a 420-megawatt power plant, a liquefaction facility and operations center could begin by the end of the year. The terminal is projected to handle six million tons of LNG a year and lead to an additional 80-plus vessel calls at the port annually, Callery says.

The Jordan Cove project would not only increase commodity movements through the Coos Bay harbor, but would also enhance the surrounding community. The proposed terminal’s owners have agreed to distribute community service fees during their construction years and the first 15 years of operations when they would otherwise receive a tax-exemption for being located in an enterprise zone. These revenues will enhance area schools and other community enhancement projects, Callery added.

The district also is pursuing additional terminal development on vacant property it owns on the North Spit of Lower Coos Bay. “Port staff has identified three sites there that have the potential for future terminal facilities,” Callery says. These include a 300-acre site and a 90-acre site, as well as a smaller parcel that could potentially handle break-bulk shipments of manufactured forest products.

Another major project for the harbor is navigation system improvements, including deepening and widening the lower Coos Bay Federal Navigation Channel from 37 feet to a depth of 41 to 45 feet. “The developments port staff is involved in will make the harbor a more viable West Coast cargo throughput point,” he adds. The channel modification project is pursuing a Section 204/408 process through the Water Resources Development Act of 1986, with the port district and its partners covering all costs through construction, and the U.S. Army Corps of Engineers assuming maintenance at the end of the modification project.