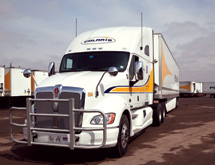 Considering how important timeliness is to LTL trucking, it’s surprising how delays can often happen on purpose. Many carriers, for example, will wait until a truck is fully loaded before sending it on its way. Some carriers consider freight being held up in customs as an opportunity to charge customers more. That’s not the way Polaris Transport operates, and President Larry Cox says that’s the reason why the company has become a leader in LTL freight between Canada and the United States.

Cox founded the company in 1994 with the goal of establishing an LTL lane between the Toronto area and Chicago. In time, the solid reputation Polaris developed with customers led to the addition of another lane to the New York City area. Today, Polaris Transport specializes in scheduled LTL transport of dry goods between Canada and the United States. The company works with a network of U.S.-based regional carriers to provide service to all 50 states, Cox adds.

Polaris has been able to grow despite the fact that the company has no sales force, Cox says. Instead, the company relies on word-of-mouth from its many satisfied customers to maintain its growth. Thanks to the company’s dedication to its principles and quality service, Polaris continues to build strong relationships on both sides of the border. “We still have our first customer,” Cox says.

Since the company’s earliest days running freight between Toronto and Chicago, Polaris Transport has operated differently from most other LTL carriers. Although many carries would accumulate freight and only send out trucks as required, Cox says Polaris’ trucks operated “like a clock,” with trucks leaving its facility at regular intervals, regardless of how much freight they carry. Cox says this allows the company to give customers a clear idea of when to expect their shipments and significantly reduces delays for them. “We operate more like a bus run,” he says.

Cox says Polaris also exercises diligence when it comes to operating across the border. The company ensures that it has all of the documentation necessary to ship freight across the U.S./Canada border, and the company’s head office terminal is fully bonded through Canadian customs. Additionally, a substantial portion of the company’s staff is dedicated to handling nothing but customs issues.

In some cases, Cox says, carriers will not have the proper credentials and freight gets held up in customs, which carriers see as an opportunity to charge customers extra. Polaris does not charge customers for delays incurred when shipments are held up by customs, Cox says, but this is not much of a concern due to the company’s attention to documentation. “Our rate of shipments that fail to clear is tiny,” he says.

Polaris’ competition is fierce, according to Cox, and runs the gamut from small carriers to large-scale international shippers. Cox says Polaris competes with both types of competitors equally well because of the company’s dedication to service. For example, many smaller carriers look for opportunities where they can take a load for a customer but then delay shipment while they try to find other loads to fill up their truck. Polaris’ system of running trucks at regular intervals may create some additional cost for the company, but Cox says it means Polaris offers service that those smaller “carriers of opportunity” aren’t able to. “They can’t compete with us in terms of the service level,” Cox says.

Even though the recession and the difference between the Canadian and American dollars greatly restricted the amount of freight being moved from Canada to the United States, Polaris Transport has emerged from the last few years in better shape than most of its competitors.

Nevertheless, Cox says Polaris is up to the challenge and has embraced technology to improve efficiency. “We’ve become pretty good at projecting our growth, and the growth continues,” Cox says.