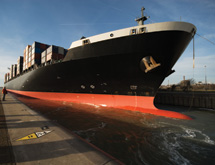 One of the nation’s largest ports for both cargo and passenger travel is positioning itself for even further growth. Three projects at PortMiami will strengthen its current status as a link to the Atlantic Ocean and beyond.

“These large capital projects – comprising the most ambitious improvement programs in our history – will transform the port and its facilities over the next several years,” port officials say. “The port, with its state, federal and private-sector partners, is investing more than $2 billion in major infrastructure improvements to support future growth of both its cargo and cruise businesses.”

All three projects represent an investment of more than $2 billion, according to the port.

The Deep Dredge project, scheduled to begin this summer with a completion date in 2014, will deepen the port’s existing channel from 42 feet to 50 feet deep in preparation for the Panama Canal Expansion, scheduled to conclude in 2015. “The Deep Dredge will make PortMiami the only U.S. port south of Norfolk that can accommodate the new, mega cargo vessels that will pass through the expanded Panama Canal,” PortMiami says.

The project is anticipated to have an economic impact of more than $34 billion annually on the port by creating 33,000 new jobs and doubling its cargo throughput. The port serves many of the largest shipping lines in the world, offering regular service to more than 250 ports in more than 100 countries.

In addition to increasing its capacity, PortMiami also is improving its access to area roads through an ambitious tunnel project that is one of the largest of its kind currently in the United States.

Construction will conclude in Summer 2014 on the Port Tunnel, which will improve access to and from the port by serving as a dedicated connection between it and the Florida Interstate system. Nearly 16,000 vehicles travel to and from PortMiami each weekday, often creating congestion on Miami’s busy downtown streets. “The tunnel will make downtown streets safer and reduce traffic,” Port Miami says. “It will also reduce idle vehicle time as well as cut down on vehicle emissions.”

The tunnel is comprised of two side-by-side tubes that will carry traffic underneath Biscayne Bay. The project also includes work on adjacent roads and the widening on the MacArthur Causeway Bridge, which links downtown Miami to Miami Beach.

Miami-Dade County, the port’s operator, is teaming with a number of entities to fund the public-private partnership project, including the Florida Department of Transportation, the city of Miami and contractor Bouygues S.A.

PortMiami’s efforts to improve access points to and from the facility will also be enhanced through a $50 million effort to re-introduce rail service. Construction is anticipated to conclude later this year on an effort between the port and the Florida East Coast (FEC) Railway to link it to the nearby Hialeah Rail Yard.

The project will reconnect the port with the CSX and Norfolk Southern railroads and allow for the faster movement of goods throughout Florida and into the rest of the United States. By interlocking the operation of on-port cargo facilities with FEC’s rail and inland assets, the Port of Miami will reduce time to market and lower inventory costs for manufacturers.

Once complete, the port will become a major global logistics hub able to reach 70 percent of the country within four days, PortMiami says.

“The on-dock intermodal rail service will provide shippers the convenience of port-to-door service with absolute lead times that match or exceed those of trucking, but with greater reliability and reduced carbon emissions,” the port adds. “Intermodal reliability is crucial to the advancement of U.S. exports.”