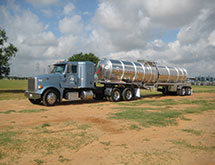 Dennis Reynolds’ first exposure to large machinery came at a young age. As a child growing up on a farm in Runge, Texas, Reynolds learned how to not only operate, but also fix tractors and other equipment.

Reynolds first turned this knowledge into a paying job on a part-time basis after  enrolling in community college in the early 1970s. Reynolds, who at the time also worked as a firefighter for the San Antonio Fire Department, spent his days between shifts working on trucks from his home.

His repair business transitioned into transportation after he was given a truck as payment for a job. From there, he acquired more trucks and grew the transportation business while continuing to work as a firefighter. The business grew even larger after he was approached about buying a fleet of trucks and trailers that carried tequila. An additional liquid-hauling opportunity came when the company was retained to transport milk for a regional dairy cooperative.

After building his transportation business for 16 years, Reynolds in the mid-1980s decided to leave the fire department to focus on his trucking business – today known as Reynolds Nationwide – full-time. “This turned out to be the best decision he ever made involving work,” says Blake Nester, the company’s CFO.

Liquid food products such as milk, tequila and chocolate remain a major part of the company’s business. The company also transports pet food ingredients and well as grain and hay. In recent years, the company has added crude oil to its capabilities, with some trucking involved in energy services. “This only seemed logical, as it was basically in [Reynolds’] backyard,” Nester notes.

All of Reynolds Nationwide’s transportation services are performed with high professional standards in mind. “We have built our reputation on some small rules that Dennis [Reynolds] requires of everyone – integrity, cleanliness, dependability, safety and honesty,” he adds. “With these characteristics in place, he believes he can provide a service that few in the market can produce or sustain.”

The company believes in taking a team-oriented approach and stresses training. “It is extremely important that we continue to bring in motivated individuals to keep the company competitive and up to date with all the modern advancements in transportation,” Reynolds says. “As the maintenance challenges on these trucks continue to change, it is important that we continue to promote training with our current mechanics and stay in front of the hiring of good, qualified technicians.”

Reynolds Nationwide believes in operating in as lean a manner as it can while still investing regularly in its operations. “You have to be able to swing with the market trends in order to survive, as transportation has become so cut-throat,” Nester says, noting the challenge the company has faced in finding drivers, as they have fled to the Texas oilfields. “Margins are very slim and volume is a large piece of the calculation to the bottom line. As oil prices continue to drop, it’s important we stay as lean as we can, especially involving our divisions related to energy.”

The company’s other commodities are less driven by market fluctuation. “Milk is our largest commodity by volume, and these dairy cows will continue to produce milk, whether its $1 or $10 a gallon,” Nester notes. “For us, we really like to establish relationships with a customer that we can dedicate our fleets to. We have no problem  investing $5 million in equipment if we know that haul is going to have a life  span in which we can, at the very minimum, recoup our costs.”

Recent investments include new dispatch software that interfaces with in-cab GPS systems, which allows the company to report mileage in a paperless fashion. “These technological advances have really allowed us to streamline our processes and become more efficient in what we’re doing,” he adds. “This has created new opportunities that wouldn’t have been there in the past.”

Nester credits the company’s success to its adaptability to market changes, as well as its work ethic and family based culture. “We plan on being around for a very long time as we continue to grow at a slow and steady pace,” he says.