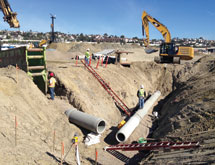 With mobile communications, the whole rental car industry is in a state of flux as legacy companies compete with Internet start-ups that offer car rental by the hour and locations all over cities.

“Because of the cell phone and other technology, the rental car business is changing,” points out Bob Bolton, director of design and construction for the San Diego County Regional Airport Authority. Those changes are being incorporated in the new rental car center that is being built as part of the north side development at San Diego International Airport.

“This building is designed to accommodate the technology and the industry of the future,” Bolton states. “These facilities are set up for 30 years of business.”

The north side development is being built on tideland where an aviation company built airplanes during World War II. Construction began in September 2013 on the 2-million-square-foot, four-level rental car center that will accommodate 5,000 vehicles and aim for LEED Silver certification. The huge $316 million facility – which will be financed by car facility charges – is due to be topped out in December, completed in October 2015 and operational by January 2016. “It’s pretty much the length of five football fields,” Bolton estimates.

Dining With a View

The roof of the building will include photovoltaic panels that will send electricity to the airport’s microgrid. Also being built on the third level is the shell for a restaurant that will take advantage of the views of the airport, the bay and downtown.Located close to the freeway exit and entrance, the rental car facility is being designed with attractive precast concrete panels and dramatic exterior lighting to reinforce the restaurant as a destination.

The rental car center will be constructed of poured-in-place concrete.  For seismic purposes, the rental car center is actually composed of eight structures that can move independently if necessary in an earthquake. The building also will have load-resisting frames and concrete diaphragms to resist earthquakes.

Centralizing all the airport’s car rental shuttles in one service location will reduce the number of these vehicles from 80 to 20 and contribute to an overall reduction in emissions and fuel use. The city of San Diego has approved multilevel fueling in the facility, so the rental car companies will be able to refill their vehicles’ gasoline tanks on three levels. This along with washing facilities in multiple locations will enable them to turn cars around from return to rental quickly.

The building’s low water requirements to irrigate the landscaping, solar panels and the bioswales along with many other features of the building will contribute to its being submitted for at least LEED Silver certification. The rental car center will use an innovative “mini-mall” concept for the rental car companies. “It allows  the rental car companies to have their own tenant space, like a shopping mall,” Bolton explains. “You would walk through a storefront into their tenant space, which would have seating and customer service facilities and their identity, like walking into an Apple store.”