The entire island of Bermuda is holding its breath as the most populous of the British Overseas Territories awaits the opening of the new terminal at the L.F. Wade International Airport. Its significance impossible to downplay, the creation of new and modern infrastructure for the local airport is guaranteed to generate manifold benefits permeating every stratum of the society.

As the project approaches its successful completion, with the new terminal scheduled to be operational in 2020, which is less than a year from now, we are interviewing Aaron Adderley, President of Skyport – the special-purpose company, which has been responsible for the airport’s operations, maintenance, and commercial functions, and that has been overseeing the construction of the new terminal for the last two and a half years.

“We have completed about 70 per cent of the project and are pleased to say that we are on track to deliver it on time,” Aaron begins. “Having recently taken receipt of the passenger jet bridges, installation work is expected to commence shortly. We have also completed the asphalt work for the roadway entrance to the new terminal, including the new short-term car parks and drop-off and pick-up areas at the kerbside. Work has now shifted predominantly towards the interior finishing.

“One of the more exciting initiatives we have just launched, is a request for local artists to produce and submit artwork to be displayed in the new terminal building,” he continues. “The goal of every airport terminal developer is to create a sense of place and one way to accomplish that, is by incorporating the input of the local community. In this case, we want to reach out to Bermuda’s artists and give them the opportunity to exhibit their works as one important aspect of a holistic approach designed to help bring unique elements of Bermuda into the new facility. We’re hoping the artistic engagement will expand further over the years to come.”

Over the course of the project, Skyport has been insistent on deploying a local workforce wherever possible, so that a considerable amount of the $285 million invested in the scheme feeds back into the local economy. The advanced stage of the project allows Aaron to look back and evaluate the performance delivered by Bermudian vendors.

“All of them have been exceptional,” he exclaims. “As a matter of fact, even our prime contractor, Aecon Construction, has indicated that the work they are seeing from local contractors working on the project is equal to the quality offered by contractors in their home market of Canada. They have been contractually engaged in various disciplines, such as finishing trades, civil trades, painting, mechanical and electrical works, as well as drywall installation, and have excelled on every occasion. I think that when these companies look back at the work they have done, they will feel an immense sense of pride, knowing that they played a central role in the development of such a landmark project.Determined to maintain the highest safety levels, Aecon has also created a compelling list of criteria for any contractor or sub-contractor to meet before starting work at the construction site,” Aaron adds. “This includes safety-related training for working at heights and chemical management, for example. For a number of vendors, it has been training they had previously not been exposed to, but the idea is that they can now take these safety practices and apply them for future projects. From the beginning, one of our main objectives was to raise the bar when it comes to worksite health and safety across Bermuda’s construction environment, and progress so far is evident.”When Skyport was formed in 2017, the company expressed a genuine desire to actively invest $3 million in local charitable initiatives over the period of its 30-year concession, demonstrating deep commitment to giving back to the community and supporting the education and development of the young people of Bermuda. The business has already directed resources to a number of public schools and sports and arts programmes, with a view to increase its investment in the area over time.

“What is more, the opening of the terminal will be essential for the island from a purely economic standpoint, as it will lead to the creation of many new jobs,” Aaron notes. “We have specified the standards that we want to reach and according to these, the operators that will be providing services from the terminal will have to employ a certain number of people to make sure that their service is of the highest standard.”

Taking a broader look at the airport’s performance since Skyport assumed the operational responsibility of its management, Aaron points out the spectacular increase 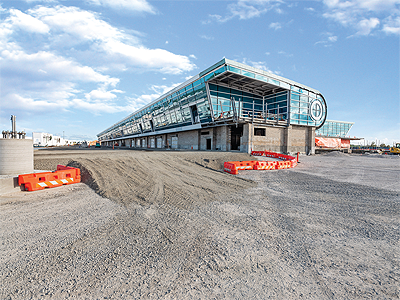 in passenger numbers year-on-year. “At one point, we had 20 or so consecutive months of double-digit growth in the number of visitors flying to and from the airport. The Bermuda Tourism Authority (BTA) deserves much credit for this. They have done a fantastic job in helping to generate this traffic. We work very closely with the BTA and, presently, we are trying to secure several new additional flights to support the new terminal. In fact, starting this coming December, American Airlines will introduce a new service out of New York LaGuardia, which means that passengers will now be able to fly to Bermuda from each of the three major airports in the New York area.”

In recognition of its strong results, the L.F. Wade International Airport was named the most improved airport in the category of under two million passengers by the Airport Service Quality (ASQ) programme for the second quarter of 2018. Aaron reflects on the reasons for the win: “When Skyport took over, the airport gained access to greater resources, both human and financial, which enabled the improvement of the existing facility. We have doubled our staff to over 60 full-time employees and have invested in updating the old terminal, but, frankly, having already exceeded its life expectancy, it has been difficult to revamp it drastically to effectively meet the demands of today’s travellers.

“This of course, is the primary reason why we are building the new facility,” he maintains. “We have big plans once we move to the new terminal. We want to be one of the best airports in our region, if not the world, certainly amongst airports our size, and the operation of the new passenger terminal will give us a chance to turn our ideas into reality and achieve this goal,” Aaron caps off.

Skyport
Operator of Bermuda’s L.F Wade International Airport
Currently overseeing the construction of the airport’s second terminal
Has enjoyed continuous growth in passenger numbers over the last two and a half years